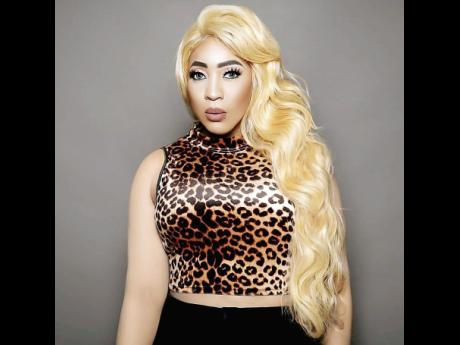 Dancehall artiste Spice posted this light-skinned version of herself on Instagram recently to highlight the message of her single, 'Black Hypocrisy'. 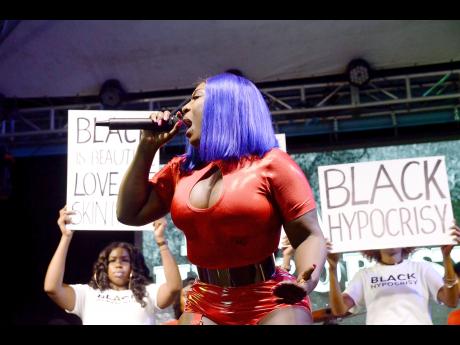 Spice performing her single Black Hypocrisy at the launch of her mixtape in November.
1
2

It's amazing to watch how celebrities are able to manipulate the media and use their platform for both good and evil. It's also very entertaining to watch how they relate to each other, their critics and even their fans.

As a fan of dancehall music, I thoroughly enjoy the theatrics that come with the music and the personalities as they navigate their way through the space. Over the past few days, a lot of things are coming up about Spice, as she has, once again, demonstrated her prowess at keeping the narrative on her. I must say that I am impressed with how she has managed to keep the media focused on her every move and use it to speak to the narrative that she is pushing.

For the few people who have not been paying attention, Spice is usually pretty active on social media. And for a few weeks, the Jim Screechie singer seemed to have abandoned the platform, returning later with a photo of a much lighter version of herself. Of course, this photo almost broke the Internet, and it had everyone wondering if the dark-skinned artiste, who had always professed to love being black, had decided to take on a lighter look.

In her usual style, the newly crowned 'Queen of the Dancehall' posted follow-up photos and eventually a video for her new single, Black Hypocrisy. In the song, Spice spoke openly about how persons in her own black community have treated her inferior because of her complexion. Spice stated in later interviews that she wanted to use the single to shed light on colourism because she realised it is prevalent in Jamaican culture and one that she has personally experienced.

So, let's look at colourism and how it manifests itself in our culture. Colourism is a form of discrimination or prejudice that is experienced by persons based on definitions and assumptions made about the colour or shade of the individual's skin.

Believe it or not, evidence of colourism has stained Jamaican culture and is very prevalent throughout our history. There are clear cases of certain jobs that were reserved for persons with lighter complexion. Even today, though not as prevalent, there are still certain positions that are reserved for certain individuals of lighter hues.

Personally, I applaud Spice for bringing some attention to colourism, especially in the dancehall space where skin bleaching is still very prevalent. There are many of us who still believe that lighter is better, so it's great to hear her lend a voice to the conversation.

However, I would like to see more done to advance the conversation. It's not enough to just bring it up for the song, but there is an opportunity to really change some minds if we are open to do the work.

Young people already have many obstacles to overcome and colourism is another one. As adults, we must do better to empower young people and help them be more confident in their natural skin. Between bleaching, cosmetic surgery, and just some unrealistic beauty goals, it's very difficult for adults to maintain a strong sense of self and confidence, and it's even harder for teens. Let's do our part and provide more examples of beauty so they don't think that only one standard counts. Beauty, after all, is in the eye of the beholder.