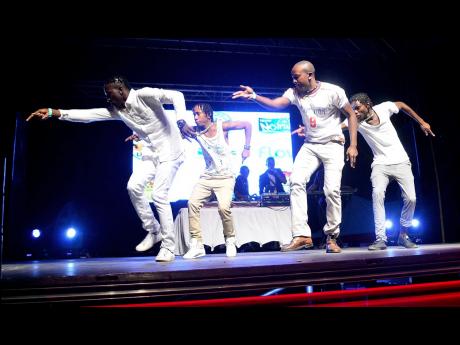 File Elite Team performing at STAR Awards in May.

Members of local dance group Elite Team say that although they have garnered much recognition overseas, the dance team is yet to receive the respect locally, after much sacrifice and hard work to better their craft.

The nine-member group sat with Dancers Paradise recently and told us of their achievement and journey to date.

The group members, majority of whom hail from East Kingston, say they have been a professional group since 2010, although they have been dancing individually before that time.

"We have been working consistently. Did our first tour in 2012 called True Jamaican Camp in Russia. It was a one-week tour and from then on everything started ... some of us went back in 2013 for two months where we did nine countries - Sweden, Italy, France, Spain to name a few," Cosmic said.

Khemist Elite added, "The team has been widely exposed outside of Jamaica to an extent, but in our own turf (Jamaica), where recognition is deserved, the credit is not given where credit is due."

"We are thankful for the strength from others along the journey. Big up Nina from Sweden, Maria from Russia, Bob from Austria and members of Rifical as well," Cosmic said.

Elite Team has performed in music videos like Konshen's Do Supm, Sean Kingston and Nicki Minaj's Dutty Love, Drake's Find Your Love and Voicemail's I Wanna Dance. They have also created dance moves like 'Badda Wave', 'Shoota', 'Gringo', 'Pop One' and 'Garlin'.

"Rihanna shared one of my dance videos and we met with one of Chris Brown's back-up dancer, who was impressed by our moves and we taught them a step or two," Cosmic boasted.