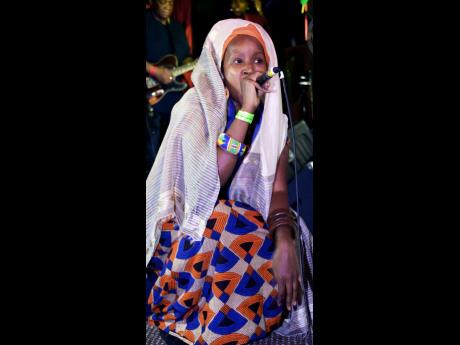 Roots Reggae singer Khalilah Rose is on a musical high.

The humble Rastafarian songstress was in fine form last Saturday night when she appeared the Black History Salute concert at T Chances in London, England.

Although her set was cut short because of time restrictions, Khalilah wowed the audience with songs from her impressive roots catalogue such as Black Star Liner, Not Giving Up and Your Eyes.

Her rendition of Garnett Silk's Splashing Dashing was also a big hit with the audience.

However, Khalilah was not pleased because she did not get to do her full set for her fans in the UK.

"The response from the audience was tremendous; a lot of Rastafarian brothers and sisters came out to show their love for my music. I was the closing act and in the midst of my set I was told to cut my performance short. The people in charge of the venue made an error that affected the length of the show. Their mistake prevented me from delivering the show I had planned for my fans, but I still give thanks to Jah that I was able to please the audience," she said.