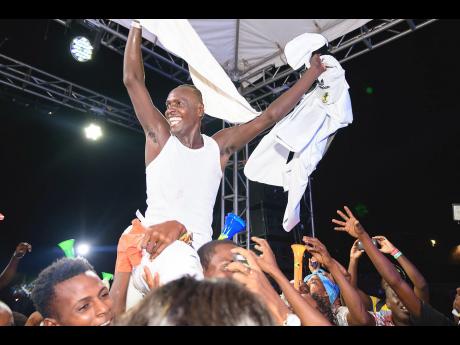 No Limit fans hoist DJ Callum in to the air. 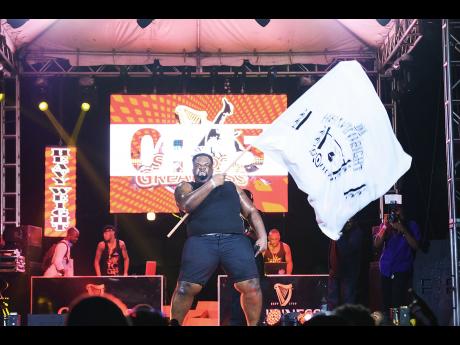 Clarendon-based No Limit Sound is the Guinness Sounds of Greatness (GSOG) 2016 champion.

The sound was crowned at the finals last Friday.

Despite crowd support for Corporate Area sound Heavy Weight, No Limit won over the judges with an onslaught of dubs made specifically for the finals.

"No Limit drifted off course for about two songs, but they had it - better dubs, smarter speech in between the dubs, and dem just kinda pound Heavy Weight," said guest judge Colin Hines.

The judging panel - which included Tall Man and Ricky Trooper - was grounded in the decision, despite crowd support for Heavy Weight.

"The crowd was mostly one-sided, but we were listening keenly and No Limit exhibited a lot of presence under pressure," said Colin Hines.

The finals brought a new format with each sound facing off in a dub clash.

Heavy Weight, No Limit, Fire Shane and Shadrock, who had all survived the weekly knockouts to get a shot at the $1-million cash prize, quickly got the massive crowd into a frenzy.

"This week, we placed more focus on clash-style juggling - we challenged the sounds to come with their best dubs and the result was a more entertaining show that brought out thousands of patrons to the Red Stripe Oval," said Imru James, brand manager for Stouts.

The new format proved beneficial to No Limit.

"From the first clash I don't sleep two hours straight - every day in studio," said No Limit hype man Callum.

Heavy Weight roused the crowd to cheers with their mix of Ding Dong, Beenie Man, and Bounty Killer dubs.

However, they could not respond to No Limit, who reeled off songs such as Beat and Teach by Mavado, and Work It by Aidonia.

"Him nuh play nuh classic, him nuh go nowhere near clash region," said Callum, when asked about his rival in the final round. "People jump for him, but at the end of the day we have judges, people who know 'bout sound clash."

Callum said the sound would be taking the title and their winnings back to their home town of Gimme-Me-Bit, but the journey won't stop there.

"It's not just about the $1 million, it's about what comes after," he said. "Mi just come to win GSOG and push mi career, and push me sound."