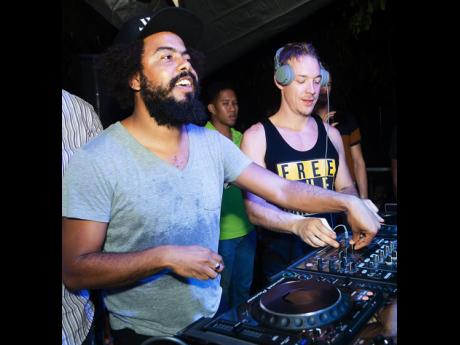 The highly anticipated Major Lazer concert hosted at the Mas Camp recently pulled hundreds of patrons to the venue for some solid high-energy musical displays.

Patrons were already enjoying themselves by midnight; however, Major Lazer came and raised the bar even higher at 12:30.

"They have been fighting reggae for over 50 years now, see all the Yellow Page a get a fight," he shouted over the mic to a roaring approval.

The group also paid homage to the late Garnett Silk by displaying his image on a huge screen for patrons to see.

Their first local hit Pon di Floor, had females pairing up with their partners for a dance, while Busy Signal's Bumaye had them screaming atop their voices.

By 11 p.m. during the juggling by Chromatic, the venue was already filled with patrons, while hundreds were queued up outside, hoping to get their taste of the EDM and reggae experience.

Chromatic got strong responses from a series of Bob Marley songs. They also went for classics from Jah Cure and Sizzla Kalonji as well as singles from Collie Budz and Junior Gong.

Dancehall rhythms like the Pile Up and Tommy Lee Sparta's Buss a Blank also made the cut.

There were also performances from Chronixx, Protoje, Sean Paul and overseas-based Jamaican singer PARTYNEXTDOOR who was returning the island for the first time in a decade.

The event concluded at minutes after 2 a.m, with Walshy Fire promising to continue the event in future as a gift to the Jamaican people.