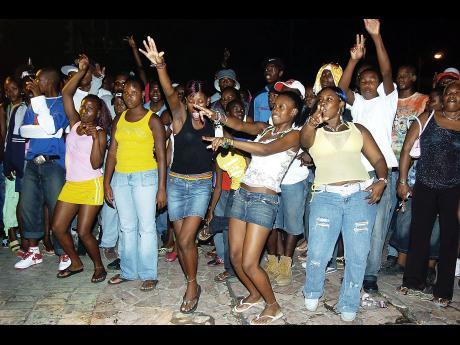 File Persons enjoying the music at a street dance.

Montego Bay-based dancer Dyema said that she is feeling the pinch from the surging crime rate in the island's second city Montego Bay.

The 36-year-old told THE STAR that for almost a month she has been unable to benefit financially because of the lack of street dances.

"The place mash up bad and nobody can't keep no dance because no permit nah run. Even so, nobody wouldn't come out to them cause every man waan dem life," she said.

She said that if promoters can't host dances or other events, she can't work.

"This war ting a mash we up really bad. Is like the man dem (gunmen) no fraid a nutten. The flood come the other day and it not even move dem," she added.

On Thursday, Prime Minister Andrew Holness declared a state of emergency for the blood-soaked St James.

The police have announced that there will be some changes to the operating hours of businesses in St James as a result.

For example, community recreational areas have to close by 6 p.m., while spirit licence premises must close by 9 p.m. Clubs and fast-food outlets must close their doors by midnight.

But Dyema said that she was happy for the state of emergency and feels it should have happened before now.

"Me just hope dem go to all the right place dem like Canterbury and Glendevon and dem place deh. Dem need to focus on the correct place dem," she said. "Over one month ZOSO (Zone of Special Operations) or whe dem call it deh (Mt) Salem and me see the man dem a lick down man over deh same way."

Dyema told THE STAR that in addition to losing a few friends, her home was ransacked early last year.

"Last year me have to run left my yard a Glendevon and gone pay rent now in another section of St James. Mi born and grow a Glendevon and the man dem empty me house, so you can imagine what dem would do smaddy who never born deh. When me reach back a mi yard the only thing stand up a look pon me inna me house a me two bed dem," a frustrated Dyema said.

Last year was the bloodiest for St James, with an alarming 335 murders. Even with the presence of security forces, Glendevon remains one of the most volatile communities in the parish.

"Glendevon a place whe me use to come out a me house all 3 a.m. to go dance, but now all 7 p.m. the place look like ghost town," she said. "Me can't get my taxi man to come out a him house certain time fi carry me go to my event dem again. Now me affi go a the dance dem extra early and walk with me clothes to change."