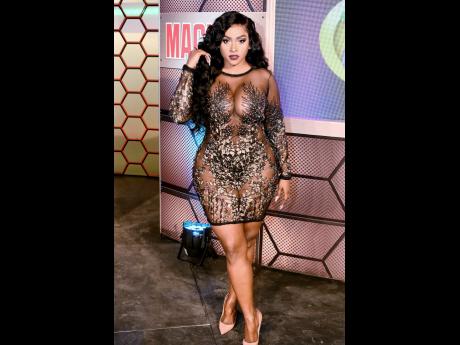 The rumour mill has been churning recently with allegations of a relationship between popular Jamaican host and recording artiste Yanique 'Curvy Diva' Barrett and international Afrobeat superstar Wizkid.

The rumours started late last year when Curvy Diva visited Nigeria and performed in Lagos at Wizkid's concert, Wiz on The Beach, in December.

The two were spotted hanging out at various locations throughout the diva's two-week visit.

Recently, Wizkid posted a video of Curvy Diva dancing to his new single, Soco, on his Instagram page. She then reposted the video to her page.

A video circulating on social media over the past few days of the two enjoying each other's company has added to the speculation.

However, Curvy Diva has denied being in a relationship right now.

"I did say last year that I was open to being in a relationship in 2018, so everyone who I've been seen hanging out with, people have been speculating that we are in a relationship," she explained.

She added: "Wizkid and I are friends. He's a talented artiste, and we have been following each other on Instagram for over a year, and as a person, he's fun, and we enjoy each other's company, but we are not in a relationship. I'm still single, guys, and whenever that changes, I will be the first to tell all my fans."

Curvy Diva is set to shoot a music video with I-Octane for their single, Unfair Games, produced by Good Good Production later this week.

The Curvy Diva is also planning her first-ever birthday party, Lifestyle the Pool Party Edition, to be held on Sunday, April 29, at the Constant Spring Golf Club.