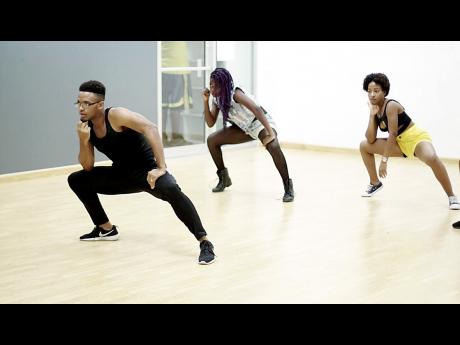 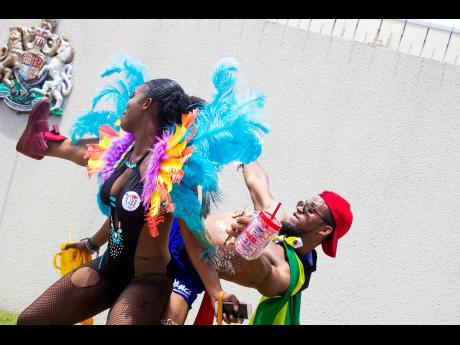 Chester Jones and a fellow reveller getting on bad. 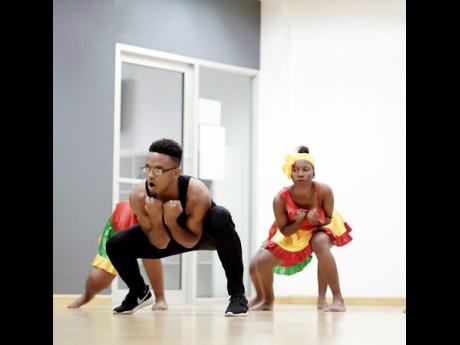 During the carnival season, avid local social media users may have come across the video of Chester Jones charging, then agilely 'attacking' his female dance partners 'from the back'.

However, Jones is not just an extraordinarily back-bending phenomenon in the dance, but on the stage as well.

Though Jones completed his tertiary education with a degree in journalism, this 21-year-old has spent the better part of his adult life teaching, choreographing, and living for dance.

"This is the life that I want to live. I never went to School of Dance, but here I am with my degree in journalism, doing the most in dance," Jones told Dancers' Paradise.

Jones said he was dancing in church from he was a baby.

"But when I was in high school, I just knew that I needed to be moving, I needed to be dancing," Jones said. During much of his time at Manchester High School, the dance programme was defunct, until classmate Shamara Spencer came along.

"She's the person who brought the club back to life. She was, and has been, a motivator for me," he said.

Jones kept up with the extra-curricular activity until his final year of high school, when he became president of the club.

Moving on to the University of the West Indies, Jones continued to follow the passion by auditioning for the University Dance Society (UDS) in his first year, and making it to the advanced class.

"When I started UDS in first year, I said I wanted to take over the club," he said. But Jones had to quit to focus on school.

"I couldn't keep up being there and going to class," he explained.

DANCE IN HIS VEINS

But the dancing stayed in his veins. Figuring his way around, Jones managed to become dance coordinator on Preston Hall, went back to UDS and became its president. He has been choreographing for the society since then.

Last year, the passionate dancer made the move from performing to teaching.

"I teach from two-year-olds to adults. I teach baby ballet, as well as Latin dance, hip hop and Afrobeats," he told Dancers' Paradise.

Before becoming an instructor, Jones' reputation preceded him. Without a manager or a booking agency, the dancer has been approached on all sides, to choreograph and perform in commercials, for artistes, and even for dance classes in local gyms.

Jones said that he has performed with local stars like Tifa, I-Octane and dancehall dance champion of 2017, Ding Dong.