STAR of the Month: Gun tunes don't work for me - Shane O 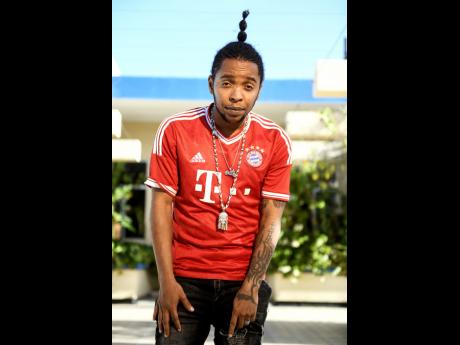 STAR of the Month Shane O shows off his heavily tattooed left arm.

Many dancehall lovers will remember Shane O for his breakout hit, 'Lightning Flash', which catapulted the then Kingston Technical High student on to the stages of school barbecues, fundraising events and fetes.

Songs that followed, such as Bun Fi Bun, Anything A Anything, Ghetto Prayer and Life Soon Change, were thought to have too much of a serious tone in comparison to his 2005 his single.

"The bag a song dem weh me did a sing never a work, but [dem] help me find back my lane," he told THE STAR.

And although those releases were not working for him and he was seemingly absent from the entertainment scene, Shane O said he was not far away. He said that he remained close by, as he was writing songs for other recording artistes. He said that he wrote Yanique 'Curvy Diva' Barrett's single, Lifestyle. And Shane O is also popularly credited for writing Mavado's Touch Di Road (2008), but he said that he does not necessarily create songs like those for his own catalogue.

"If me sing gun song, dem nuh work. Mi sing dem song deh already and it nuh work, so mi leave it alone. As an artiste, if you see other artistes a do it and buss, you going to want to try it.

Older and more mature, this father of two seems ready to continue his musical journey with the same 'too real for radio' style that he is known for.

"Out in the garrison, there are things we see every day. Nuff man nuh understand you can build those songs from outta dat even when a nuh me a the bad man in the song," he said. "Mi a deal with di topics."

The Last Days deejay said that singing one set of songs may not work, so he is open to trying something else to find a style that suits him.