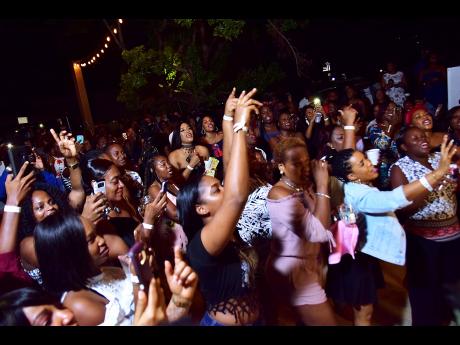 Patrons moved closer to the stage to see Romain Virgo live and in living colour on the Appleton Estate Signature Nights stage.

Patrons were out in high numbers last Thursday night to hear the voice of the spellbinding reggae artiste Romaine Virgo, who gave the highlight performance during the Appleton Estate Signature Nights event at the Chill Out Hut Beach Bar and Grill in Montego Bay.

With musical backing from the Unit Band, Virgo gave a musical reminder to fans of how he won the Digicel Rising Stars competition in 2007, as he unleashed some of his keynote hits to include Can't Sleep, Wanna Go Home (Rain is Falling), and Cry Tears for You.

Virgo did not limit himself to his own original songs, however, as he also wowed patrons with renditions of songs from local and international artistes. These included Adele's Don't You Remember, Queen Ifrica's Lioness on the Rise, and even went for seduction of female fans with Marvin Gaye's Let's Get It On and Sexual Healing.

Virgo's performance and the turn-out by the patrons both received high praise from Leleika-Dee Barnes, trade marketing manager for J. Wray and Nephew Limited, which owns Appleton Estate.

"The venue was brimming with his fans who thoroughly enjoyed the night's proceedings, and we could not be more pleased with the level of support the series has received since its inception," said Barnes.

The Signature Nights series goes to eight locations across Jamaica each year, with music from different artistes along the way. This year's hosting, which began in February, has so far featured performances from Beres Hammond, Bugle, I-Wayne, D Major, Konshens, Sanchez, and Virgo's fellow Digicel Rising Stars alumnus Chris Martin.

The series concludes on December 13 with reggae star Taurus Riley slated to perform.