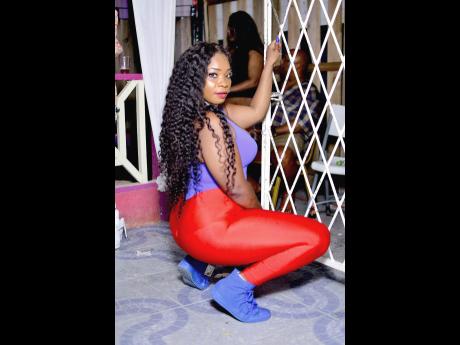 When dancehall deejay Pamputtae entered the viral '#10yearchallenge' on social media on Sunday, she did not do it for the 'likes'. She said she wanted to show her physical transformation to Internet trolls who have been criticising her for not doing cosmetic surgery. The decade-old photo, which was initially shared on her Instagram story, has been shared on various blogs with hundreds of users lauding Pamputtae for her new appearance.

"Me did really haffi go inna the challenge. Me want people fi know seh natural body still in. It still a wear and is not fake body alone a wear," Pamputtae told THE STAR. "Me diabetic, and me decide seh me a go do weh me haffi do fi get fit and get results. Me want people accept me, acknowledge me and give me the glory. Stop bash me 'cause me work hard and go inna the gym."

Pamputtae said that throughout her career, she has often been labelled as "big, black, stink and dutty" because of her appearance. With the help of artiste friend and fitness coach Stacious, the deejay said that she has adopted a healthier lifestyle.

However, some people still aren't pleased.

"Even when me work out, people still seh me do me body," she said. "Before surgery did popular everybody used to go the gym. Me nuh bash nobody who waan do dem body. When dem put up dem picture, me comment and give dem fi dem props. So when people see me a put in the work dem must acknowledge greatness and acknowledge God work."

She continued: "Me get frustrated reading the negative comments sometimes. It's like no matter how yuh try, some haters deh pan yuh back same way," said Pamputtae. "Me nah go tell yuh seh every day me eat right, but me try fi keep up myself. People just love use everything fi bash me. Me do a song name Single Mother, and dem bash me seh me tek people man same way. Me muh know wah fi do, but me nah give up though."

In maintaining a positive outlook, Pamputtae finds her motivation through her children.

"When me see where I'm coming from, me feel extremely good, and me haffi seh: 'Thank you, Lord', because nuff people try and dem give up," she said. "Me use life itself and me kids to push me 'cause if me kids nuh have me, me nuh know weh dem a go do 'cause a me alone."

Other celebrities who participated in the challenge include Tifa, Yanique Curvy Diva, and Shenseea.