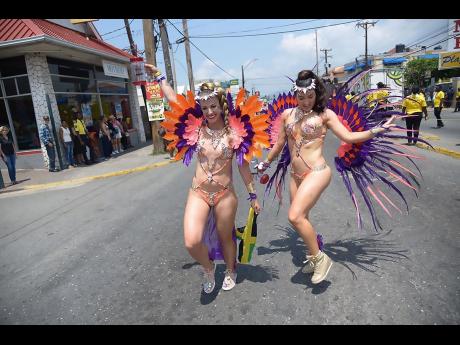 Hailing from the US, Shelly Hebert chose Xodus Carnival for her final hurrah before getting hitched. Here to celebrate her bachelorette party, Herbert and Caroline Le Duc were estatic while marching. SHORN HECTOR PHOTO 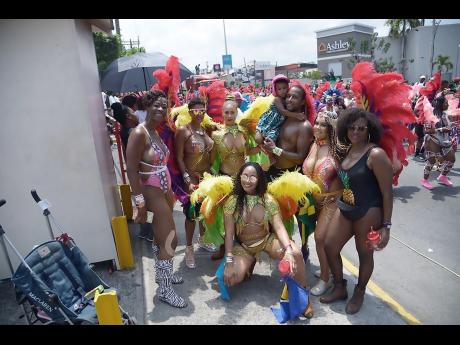 Herbert and her friend Caroline Le Duc joined thousands of fellow masquaraders on the streets of the Corporate Area for carnival in Jamaica.

The bachelorette party is among several cool carnival moments spotted by The STAR during Road March 2019. This year is baby Angelina’s first time on the road.

One of the big hits for Carnival 2019 is Famalay by Skinny Fabulous, Machel Montano and Bunji Garlin. And the Lawrence clan took the theme to heart for Road March.

Angelina’s Trinidadian father, Nicholas Lawrence, and his Jamaican wife Luna Lawrence, who both reside in Florida, were determined to make their offspring a real ‘Carnival Baby’ so they took her to Xodus.

Propped high on his shoulders, little Angelina was alert and seemed quite happy to be out with her family and their friends.

“She’s actually a real 'Carnival baby', as in Trinidad Carnival a year back ... literally a Carnival baby,” Nicholas said grinning, as he more than subtly hinted at Angelina's conception.