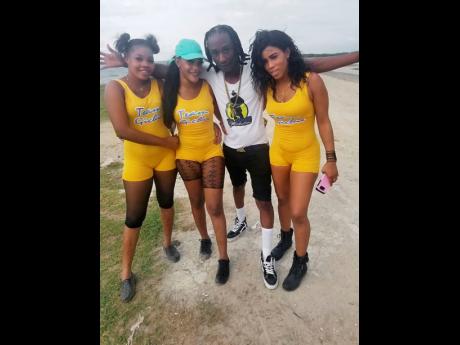 Jerome Gichie has surrounded himself with promotional girls as he seeks to kick-start his entertainment career.

As a boy, Jerome Gichie and his older brother, Dalton, would accompany their father, Dalton Gichie, to various reggae shows within the Second City. The elder Gichie was a popular peanut porridge vendor in Montego Bay, St James.

Jerome’s job was to assist his father to sell peanut porridge to patrons and entertainers, but deep down inside, it was his love for music and his dream to one day be a recognised dancehall artiste that caused him to follow his father around.

Jerome, 32, who resides at Peace View in Albion, St James, told WESTERN STAR that he and his brother became focused on being dancehall entertainers. His brother, who is now known as Mr Slick, got the break before he did.

“At that time, mi break off from mi father business and start mi own porridge business. Mi even have two worker a work fi mi at the time, suh it allow mi fi focus more pon mi music,“ he added.

He has so far recorded songs such as One Day, Charge Up, So In Love and Lonely Road. Jerome said he is now focused on pushing his career to the limit, so he and his promotional team will be Kingston for the entire week, where they will be doing road promotion.

Jerome is seeking to join a list of dancehall artistes from St James who have taken the music scene by storm. The stars from the west include Tommy Lee, Teejay, Squash and Rygin King.

“It inspires me a lot because a lot of dem artiste yah, me know dem, and me inna the music business long before dem, and to see dem go towards the music and dem buss, it inspire me fi know seh it can happen fi me, too,” Jerome said.