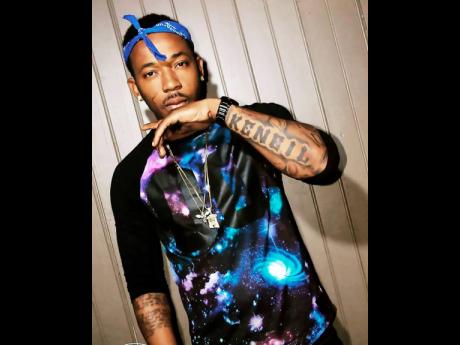 Keneil Merital, who became popular as part of the Montego Bay-based Merital Family, has adopted a new moniker, Badgettn, inspired by his artistry and ambitious nature.

"From Merital group days, dem always seh mi bad 'cause me have the big voice, but because of the group me just work with the group name. Now that I'm a solo act, people still a tell me seh me bad and I'm a go-getter, so me just put them together and get Badgettn," he told The WEEKEND STAR.

Though he considers this a rebranding, he said he has not neglected the Keneil Merital name as it is symbolic of his entry into the business and several fans still associate him with it.

"Me nuh have a problem if some people still call me that cause a deh so me a come from and me cya throw it weh right at this moment until I reach certain point," he said.

His latest release, 1,000 Million, carries a hybrid feel and is produced by Studio Vybz. He shared that its crossover sound was not intentional, but it reflects the current direction of his music.

"I got a few rhythms from Studio Vybz and that one kinda catch me brain. The sound is soothing to the style of music weh me want put out right now, a more international, hip-hop, dancehall vibe. I've been putting out a few songs since the past couple of months, but 1,000 Million is the song that everybody likes," he said.

He emerged a decade ago as one-third of Merital Family, aligned with Vybz Kartel's Portmore Empire. The group is most remembered for songs like Money Ha Ha, Pray and When We Party.

Though member Corey Merital passed in 2015, Badgettn confirmed the group (the other member is Blade) did not part ways, but only split from Kartel's assembly.

"We still remained as a group. We tek the passing of Corey to heart and certain things slowed down, but we never stopped doing music. Music is like politics right now, you'll put out your good music same way and nuh get no airplay, but we love it and still do it. I must admit that it is easier being a solo artiste, as it's a lot less to manage," he said.

He shared that he will be making a surprise appearance on Festival Night One at Reggae Sumfest in July.