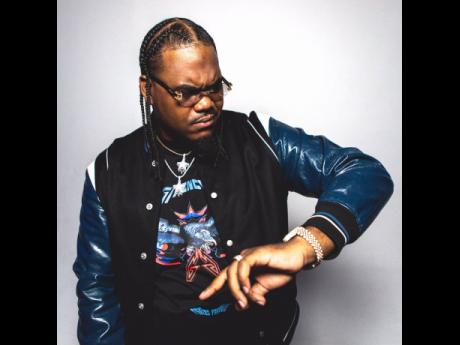 Jamaica-born, Los Angeles-based rapper, Zuse, is rebranding himself and wants to be known as the Codeine Cowboy, and he's probably well on his way.

Since the visuals for his latest single, Codeine Cowboy, premiered via WorldStarHipHop last weekend, the video has quickly climbed to half a million views. Despite the fact that codeine is a painkiller that damages kidneys, Zuse hopes his song about its leisure consumption is relatable enough to climb the charts and cement his status in musical history as the creator of Jamaica's newest genre, 'reggae-trap'.

"Since 2004, I've given the people at least seven mixtapes and they slept on it. Those who heard them loved it," he told The STAR. "But this year will be different."

Zuse recorded Codeine Cowboy last summer. It was one of seven songs created in one studio session. According to Zuse, a consensus from the session determined that Codeine Cowboy was the track to release. "I won't say it's my best, but we all agreed to it, to try something different, which is working," he said.

Codeine Cowboy is a sort-of tribute to the drink, and the culture around it - a shared culture, he's found between Atlanta and California. With some success found in Atlanta, Zuse is now trying his luck in Los Angeles. "I think I wasn't marketing or branding myself properly, so I moved to L.A., to learn new sounds and cultures. It's been two years," he shared.

While acknowledging that the drink slows down bodily functions, Zuse insists that the only effect on him is creativity. "All it does to me is make me want to come out with new songs, styles and lyrics. I'm not promoting drugs, but I know that people will relate to what I do. It's terrible for the kidneys, but it's the drink of choice. Lil' Wayne made it popular, then Future made it global."

With Codeine Cowboy at half a million views and counting, Zuse is back on track to establishing 'reggae-trap'. "It's a new genre that I've created. I'm very proud of people like BakerSteez continuing something that I sparked. Being around Tech N9ne, T.I. and Post Malone, I'm on the path of greatness. We need to come over to America and take over the rap industry."

Zuse migrated to the United States at age 19 to pursue his lifelong dream of being a rapper. "I could have gone to Miami or New York, but I went to Atlanta, the mecca of urban trap music," he said, speaking with The STAR.

He recalled living in the trap mecca, on the corner of Ben Hill and Campbellton Road in Zone 3. "I got myself out in the streets, doing open mics," he shared. It was a tactic that worked, since he got introduced to Atlanta success story, T.I. Zuse said that when he met T.I., the popular Atlanta rapper was already a multi-platinum selling artiste. He said: "We would be in the studio and he was always telling me about hard work."

In 2015, it seemed Zuse's hard work and big name associations were paying off with the release of On The Bible by Tech N9ne, featuring both Zuse and T.I. The official music video is sitting comfortably at over 10 million views. That same year, Zuse was featured on a Hustle Gang compilation What You Gon Do Bout It? led by T.I. featuring Zuse, Trae The Truth, and Spodee, a clip that has amassed more than six million views. Zuse's most popular collaboration to date has been with rapper Post Malone, on the track called On God, which has more than 30 million plays on Soundcloud.