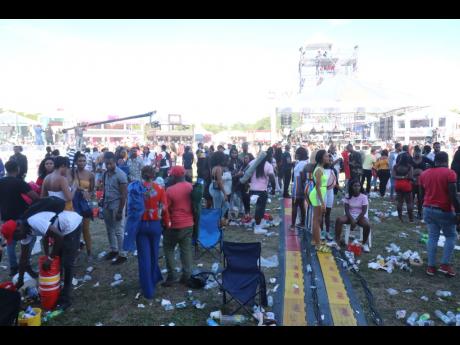 Disappointed fans leave the Catherine Hall, St James venue after cops pulled the plug before the 6ix could perform.

Members of the 6ix are said to be bitterly disappointed about the fact that they did not get an opportunity to perform at Sumfest Saturday morning.

Despite the disappointment, Squash, through his manager Heavy D, said not being able to perform "is part of the struggle you face as a rising star".

The 6ix camp has been otherwise tightlipped about the incident. But a person close to the dancehall artistes said, "they gave a sparking performance at a water party in Glendevon a few weeks ago and they promise that the fans would get much more at Reggae Sumfest."

What was supposed to be the finest hour for hometown dancehall star Squash and his 6ixes outfit ended in disappointment at the Catherine Hall Entertainment Centre, in Montego Bay, early Saturday morning as the police pulled the plug on Night One of Reggae Sumfest 2019 before they got a chance to grace the stage. The action by the police sparked bittier outburst from scores of fans, who ran up to the perimeter fencing that separates the stage area from the general public area, to hurl abuse at the police, who acted swiftly and decisively.

“Unoo rob me and me want back mi money…a de 6ixes dem me come fe se and unoo stop the youth dem from performing,” said an irate Carol Campbell, who said she had to “beg and scrape” to come up with the money to buy her ticket.

In fact, during the build-up to last night’s event, many Montegoinians had made it quite clear that while they were looking forward to seeing top-flight stars like Bounty Killer and Beenie, Spice, Chronixx and Agent Saco, they were primarily gearing up to see the 6ixes, which features Squash, Chronic Law, Bobby 6ix and Daddy 1.

“All when the youth them a try to best to do something good dem still a get a fight,” MC Nuffy remarked. He appeared to be drawing reference to the legal woes that Squash experienced earlier this year when he was detained under the provisions of the state of public emergency in St. James for eight months.