D’Angel recognised by the US state of Georgia 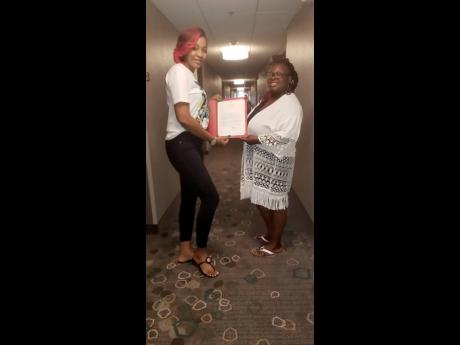 The Lady of Dancehall, D'Angel has been recognised by Governor of Georgia Brian Kemp for her hard work in the music industry.

The entertainer was awarded the official citation earlier this week at her hotel in Atlanta.

She was supposed to be awarded on stage at the recently concluded Atlanta Carnival but did not get that chance as the event was shut down due to overcrowding.

Nevertheless, the artiste is overjoyed, pointing out that having put in a decade into the local music industry, she is grateful her work is being recognised.

D'Angel is the first female dancehall artiste to be honoured by the state.

Speaking with THE STAR, D'Angel said she was caught off guard by the news, as she never expects to be awarded beyond the love of her fans.

She says the recognition means a lot, as it is testament to her perseverance despite all the negativity that has been sent her way over the years.

"I feel elated but yet still humbled. This was a shock to me, I never expected it at all it. People will always talk negative, a dem same one crucify Christ. I have been producing clean, timeless music for over a decade and I know my work is speaking for itself," she said. "I know my audience, my fan base and who my music is catering to, and I will never lose my way. Most times, it takes outsiders to recognise that. A queen is never yet crowned in her own country."

Having recently taken on the moniker 'Lady of Dancehall', the Stronger singer says things continue to align for her. She says the recognition shows that she is a true ambassador for dancehall culture and she will continue flying the Jamaican flag high even as the critics keep attacking. "As the lady of dancehall, the cap (of ambassador) fits me perfectly and I will wear it proudly every where I go. Thanks to the governor of Georgia, Mr Bryan Kemp, and the organiser, Patricia Tonge Edigin, for this recognition. Hopefully one day I'll get the opportunity to perform at one of his functions."

Edigin, organiser for the Atlanta Carnival, said D'Angel was chosen because of her tenacious spirit.

"We decided to chose D'Angel for her hard work and dedication to her music career. Every year, the Official Atlanta Caribbean Carnival recognises various artistes from different Caribbean islands and this year D'Angel was the artiste of choice. We send a write up about the artiste to our governor, they do their research and once they approve, the artiste gets an award."