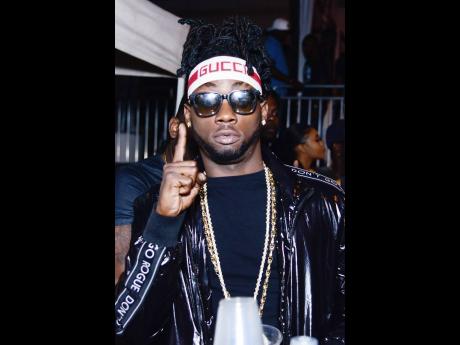 Stylo G’s recent stand-off with police in a Caymanas Estate residence was apparently a long time coming, as residents were frustrated at an influx of what they consider undesirables coming into the community.

Screenshots of a WhatsApp group have made the rounds on social media, revealing an excerpt of a conversation lambasting Stylo G and his associates’ presence in the community as too dramatic and grandiose.

But it seems the dancehall star was just the cherry on top of a pile of problems faced by members of the gated community.

“Bungle of grown man in a house, loud music being played and flashy cars. This kind of galivanting is not what we expect in this development. He needs to go back to his flat in the UK with that kinda grandstanding and drama. Yes, let us profile them and get the police to check them out,” reads some messages, using the hashtags #Unequivocal #Unapologetic.

En route to a performance in Ibiza, Spain, the dancehall artiste was dismayed at the revelation that his neighbours pointed the authorities in his direction.

“I’m very surprised that grown people would stoop so low, and the fact that I’m a Jamaican like them who always represent my country – it’s sad. Classism is real in Jamaica. People need to know!” he said.

Since the screenshots were leaked, allegations of classism have been rampant. However, Nicholas Miller, a member of the estate’s utilities committee - the custodians of the rules and regulations - defended the group.

“To classify me as classist is disrespectful,” he said.

Miller explained that the reaction to Stylo G’s rental stems from ongoing issues residents have had with short-term rentals, AirBnB in particular.

“Caymanas Estate was designed to raise families. A majority of the homes don’t even have side fences, and we’re not allowed to put up front fences. It’s not like your neighbour is 100 feet away. At most, they are 20 feet away,” Miller said.

As such, the property title comes with rules and regulations by which both owners and renters are expected to comply. And, according to Miller, those guidelines have not been upheld.

“We don’t have a problem with artistes coming in to be part of our extended family. The problem is with that property. The owner has been spoken to from the property was on long-term rental. AirBnB presented other issues,” Miller told THE STAR.

Caymanas Estate is designated by blocks A through to F. Miller revealed that across blocks C, D, E and F, most of the properties are listed on AirBnB.

“One bag of man coming and going at unusual hours, men leaving in the morning and coming back late at night...The family orientation of the community is gone, and it becomes a hustle. We didn’t buy into a hustle,” he continued.

Miller also observed that issues of outsiders in the Caymanas Estate community increased since the implementation of the zones of special operations.

“That’s when we started having problems. To fly below the radar, our community is where they come. We have proof of wanted persons coming as soon as three weeks ago. So if you carry yourself in a particular manner, persons are going to profile you,” Miller said.