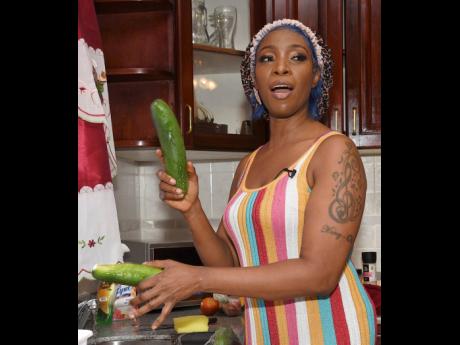 When it comes to remixing songs, only a few entertainers manage to make an impact. Macka Diamond is one such artiste. In 2012, she recorded her own version to Rihanna's ' Diamonds' and earlier this year, she garnered some attention for her spin on Nicki Minaj's ' Megatron'. Today, she's back at it again, putting her spin on Stylo G's hit song, ' Dumpling'.

"Hot gyal out and hunting, fi di man dem wit di long sumting. Cucumber affi fatter dan dumpling," raps Macka Diamond on the track. But with remixes usually left to entertainers trying to ride on the backs of other entertainers carrying the buzz, Macka Diamond made it clear that was not her intention. "Everybody knows Cucumber has its own buzz so I don't care what people want to think when they hear this remix. Dumpling remix is all about counteracting, and from we growing up in the music business we know that when a song a gwaan good yuh affi do a counteraction to It. If it wasn't me, it would be someone else," she said. "Truth is, this has always been my style. Me always feel like me fi create a part two. Memba Kartel did say 'tek bu*&y gyal and me say tek con bwoy, so it has always been me."

Unbothered by people who will say she's seeking some of Stylo's attention, Macka Diamond says the feedback has been great so far and the song has only been out for two days. "Me nuh hear no negative feedback so far, it has been so awesome. It looks like the world was waiting. It sound natural, me nah diss nobody or nothing, me just a have some fun wid the song," she said. "Honestly, this wasn't about attention. This is smart business. Stylo G hot so when me fly out and dem drop da riddim deh and me sing my lyrics, me get a forward and gone. That's the reason people do remixes, to be into wah gwaan. Me nah look no hype or no sales, me just a dweet fi di fun a it."