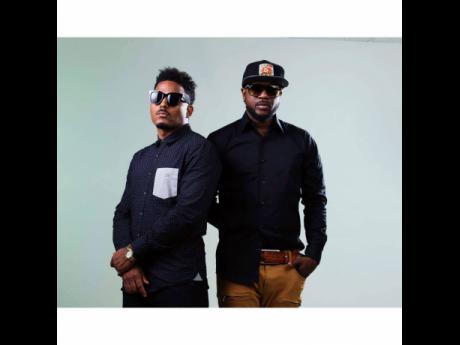 Dancehall duo Voicemail have unfailingly sustained themselves on both the local and international scenes for many years. But like most career musicians, as strong as their catalogue may be – new music is always the pree. Keeping things young and fresh, the accomplished pair recently kicked off Premier Thursdays, a social media driven, weekly live event.

Group member Kevyn told THE WEEKEND STAR that the move is in effort to engage with their fans and hopefully attract new ones.

“We’ll be in the studio premiering one of songs, or share a song that was just released, or a piece of song that’s about to be released. You can meet with us for 10 to 15 minutes of your time. We won’t take up too much time, and you never know who might pop up,” he explained.

Since they started promoting the new venture, Keyvn reports that the response has been ‘crazy’. “People have been reaching out to ask if we can premiere their music. We might move to that, but we want to get four sessions off the ground first, then we can start reaching back out to people,” he said.

Though Voicemail has a catalogue that sustains, there is one song that stands out above the rest – Just Dance (2005). Soon after, they released a second version called Wacky Dip – a tribute to Jamaica’s fallen street dancing pioneer, Bogle.

“One of the elements is that it was the first song on the ‘Jonkanoo’ riddim. Then after a short while, after Bogle passed and we did Wacky Dip, that was an automatic hit,” Kevyn told THE WEEKEND STAR.

Another element contributing to the songs’ longevity is that the tribute was more celebratory than it was mournful. Kevyn added: “It wasn’t a usual tribute song. It was a celebration of Bogle and who he was. When you’re doing a song, you’re transferring your energy to people. That’s one of the first steps to getting a hit. You tap into your emotions. But we all don’t know the exact formulas. You can create a song today and feel like it’s the best song ever, but it doesn’t resonate with the audience as well as you thought it would,” he said.

Just Dance/Wacky Dip resonates with more than its fun, bouncy melody. It makes people move. “The dance, with it gave it that extra push. To date, that song gets some of our biggest responses. From the beat drop, the energy changes. It’s definitely one of those that every artiste tries to get. We’ve been fortunate to have a few of those, but that one especially,” Kevin said.