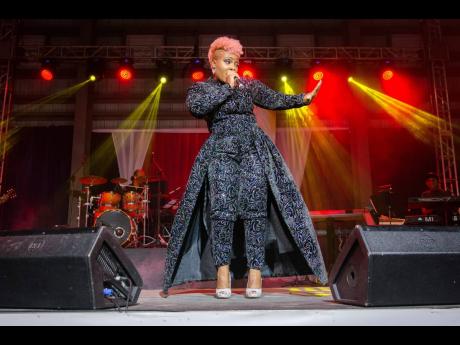 With a throwback vibe pronounced by a slow percussion with the usually vocally acrobatic singer opting to deejay, Stalk Mi Line was released as a signal that young local producers can do what more seasoned players say they are not doing.

"There was all this talk in the media saying we younger producers are making knock-off hip-hop beats. I don't make knock-off stuff. So I wanted to produce an old-school vibe - and not just trying it, but doing it intentionally. I did this to show that we do listen to and know real dancehall," Virgo told THE WEEKEND STAR.

All the same, Virgo acknowledges that keeping it old-school is not a contemporary priority.

Even while dancehall's influence continues to present in international chart-toppers, creators at home are still more influenced by American mainstream music - particularly trap.

"We are evolving, and the evolution of us musically is attributed to what we're looking at every day. But there are some of us who know our roots and culture," Virgo said.

" Stalk Mi Line is a song that was written a long time ago. I went to DZL and told him I have this track, but I want it to be that old-school dancehall. This vibe has been missing for a long time and the mass is yearning for that authentic dancehall. So we definitely want to contribute to the culture and maintain its identity," Ikaya said.

MASTER WITH THE PEN

One root aspect of Jamaican dancehall culture retained in Stalk Mi Line is Ikaya's storytelling approach. In Virgo's opinion, Ikaya was a master with the pen, and in addition to cleverly telling a tale, she showed off exceptional deejaying skills.

"In the past, there was a lot of storytelling, so we took everything old-school. She painted a story, you can see it play out in your head. She's a great writer and singer. She can perform it and you hear what she says," he said.

Ikaya added: "The song definitely did not take long to write. These are real-life situations that take place in any relationship, so the concept came across easily. I know a lot of persons can relate. When it comes to Ikaya, I am versatile, and I don't limit myself when it comes to music. Singing is my passion, because it evokes different types of emotions than deejaying or singjaying. But I do love doing both."