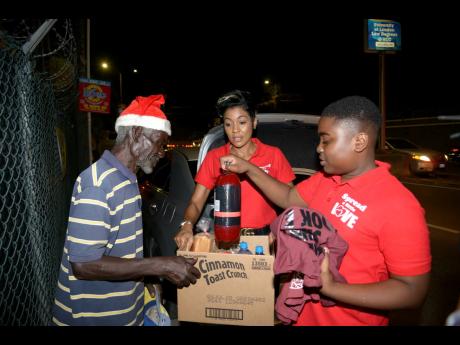 D’Angel and her son Marco Dean (right) present Earl with the goodies they bought to help make his Christmas a little brighter. 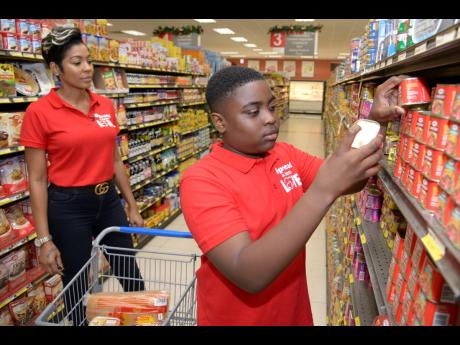 Marco Dean selects items for Earl as his mom D’Angel looks on. 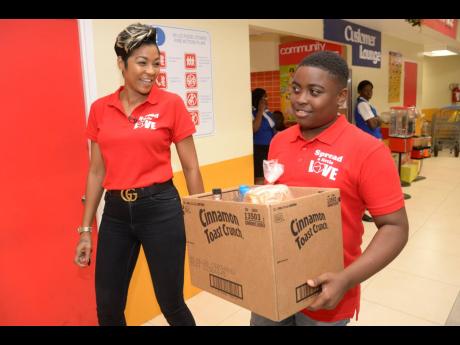 After making their purchases, D’Angel and Marco Dean head out to find Earl. 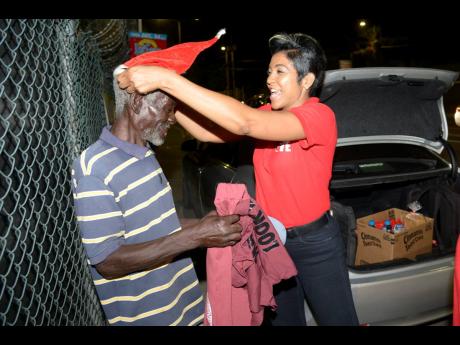 It is often said that to whom much is given, much is expected.

It is with that in mind that the 'Lady of Dancehall', D'Angel, has taught her son, Marco Dean Davis, to give back to those less fortunate.

While other teenagers are busy saving up for that brand new video game or a pair of 'kicks', 13-year-old Marco Dean donates his savings to a beggar.

Pleased with her son's generosity, D'Angel decided that with Christmas right around the corner, she would add to her son's philanthropic efforts.

We journeyed with the mother-son duo to a supermarket on Barbican Road, where they did some pre-Christmas shopping for the man named Earl.

They bought various items such as buns, cakes, bread, water and juice.

Marco Dean said Earl caught his attention one evening as he and his mother were heading home.

He said the man seemed so sad that he just wanted to do anything he could to put a smile on his face.

"Just seeing the sadness on his face, it looked horrible, I don't like seeing that so, I just gave him what I could," Marco Dean said. "I learnt kindness from my mother, she's awesome at it. I think it's important to give back because it's Christmas and no one should be sad at Christmas. I give what I can from saving up my lunch money because I just love to see the smile on their faces."

After the shopping, they went looking for Earl, and Marco Dean was the first to spot the elderly man.

"Mommy, I see him," said an excited Marco Dean as he pointed in Earl's direction. The boy quickly opened the trunk to present Earl with his box of goodies.

Passers-by, who are accustomed to Earl, stopped during the presentation to advise him to be grateful for his blessings.

When he saw the items, the soft-spoken Earl managed to muster up a "give thanks".

Along with the food items, Earl also received a fresh suit of clothes complete with a Santa hat. So delighted to have received the items, Earl mentioned he would share the items with a "bredren", who was like family.

Earl told THE WEEKEND STAR that he does yard work when hired but otherwise stays afloat from donations offered up by people like Marco Dean and his mother.

D'Angel, who runs a foundation dubbed Spread A Little Love, said her son's act of kindness has prompted her to do more giving back this Christmas.

"Seeing how passionate Marco Dean is about helping people, it dawned on me that we should do even more this year. So this is just the beginning. We will be going back to Spanish Town, my hometown, where we will be sponsoring the Mustard Seed home. My son says he wants to put a smile on somebody's face and we're gonna do just that this Christmas," she said.