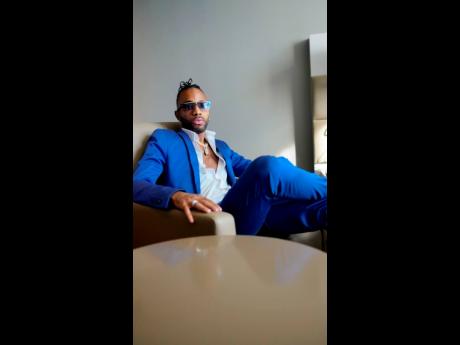 QQ, the singer who started out as a big-voiced youngster lamenting the ills of poverty, is now a full-grown, red-blooded male who is unafraid to tell the world that the former child star is a real man now, and he has sex on the brain.

On Wednesday, QQ released the visuals for his latest single called Vise Grip. Leaving modesty at the door, the clip features the dancehall artiste in a raw and raunchy tumble with a woman, an explicit performance never seen before from the still-young act.

Before the video dropped, QQ released a steamy trailer for the music video

"Every time someone says, yo the teaser is crazy, and then I watch back the video - I just get excited all over again. The only thing I regret about that video is that I can't shoot it all over again. That's how good it was," QQ told THE STAR.

Vise Grip adds more mature dimension to the long-time recording artiste. And, while presenting this mature image, QQ is not opposed to the idea of women pedestalling him as a sex symbol.

"[Sex] is one of the most important things we do in life. We create. If somebody has me as a sex symbol, I think that's a good thing. Ain't nothing wrong with a sex symbol," the singer said.

Since his emergence as a youngster with the impressive debut hit, Poverty, in 2005, QQ has managed to maintain a sober, respectable public image.

"People ask me this question and they think that there's a strategy, but I think all of this is only possible because I have a lot of love for God and God has a lot of love for me. He just always create an avenue for me. He has always just given me the vision and pathways to go down and I've never steered. I've taken it. I guess this is just my reward for obedience."

As QQ moves along this new, sexy avenue, he will be sharing some more hot and heavy singles after the new year rolls around. "Still haffi make di woman dem bruk out and vibrate and just enjoy themselves. Nothing to me like making the ladies happy. Seeing that this gets them so happy and excited, I am very turned on by it," he said.

Vise Grip is now available for streaming on YouTube and other platforms.