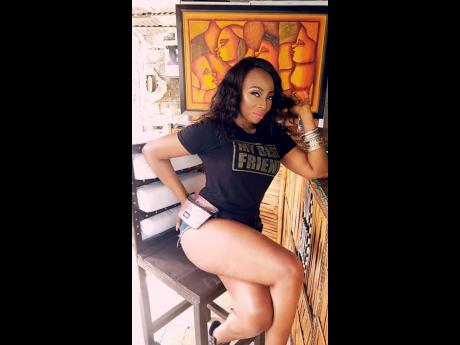 Though there are many songs about the covetous nature of 'bad-mind people', dancehall artiste Macka Diamond thought the issue was worth exploring yet again.

Following the release of her latest single, All Dem A Talk, the artiste told THE WEEKEND STAR that as the target of people's never-ending online attacks, she is the perfect voice for speaking out against bad mind.

"The song is inspired by all the negatives they try to beat me with online. In this song, I'm telling dem say 'All dem a talk, me nuh matter dem'. The more they beat me down, the more I strive. It's just the blessings. My career stepping up and no bad energy cannot stop it," she said. "Even the other day dem try beat me bad wid a photo wid me and a lady a pray. Dem talk all kinda things but me blessed, so no matter what people say, me just a glow."

The entertainer was referring to a picture which surfaced on social media last week showing her seated on some blocks in a secluded area. A woman with her head wrapped in a turban with a pencil stuck inside it is kneeling in front of her.

The woman is holding Macka Diamond's hand and the two appear to be praying. Social media users speculated that the artiste had gone to seek spiritual advice from her 'obeah woman'.

Others speculated that it could be a publicity stunt to herald an upcoming project. Macka Diamond insists that although it seemed staged, she had no idea the photo was being taken.

"We were praying. The woman is me prayer warrior, we pray together all the time. We pray all before me go on stage more while. It was a quiet moment and I didn't know someone would pass and take a pic. Honestly, I don't know how that pic went out," she said.

Nevertheless, she is happy it did. She said yet again, she was able to use what could have been a negative situation to her advantage.

"All I did was laugh and kept it moving. In the end, I think the picture worked for me. The song got 100,000 views in one day. I expected it to be big but that many views in 24 hours is a good look," she said.