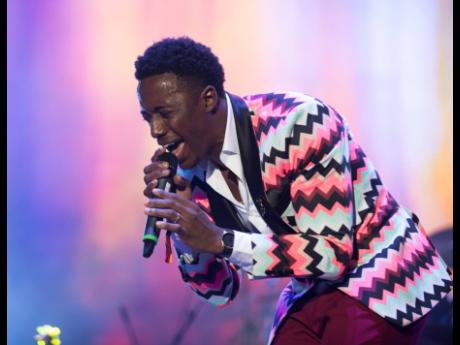 Before he delivered the hit single, Dutty Man, at yesterday's Digicel Unplugged Father's Day special, Romain Virgo urged parents to be on the lookout for signs that their children are being abused and protect them.

Virgo had lamented that many children are having much more contact with their abusers because quarantine situations have closed schools and prevented public gatherings,

It was one of the many memorable moments during the musical treat, as the online concert served up some stellar performances from the evening's three acts, Matthew Malcolm, Tessanne Chin and Virgo.

Malcolm, a newcomer to the music scene, proved he is a man on a mission to making his mark on the industry when he delivered a soulful rendition of his original single, War For You.

His performance was just the start the live stream needed to prepare viewers for songstress Chin.

Chin, who celebrated her first Mother's Day last month, following the birth of her daughter in February, doted on her husband and first-time father, Brandon Crooks.

After serenading her own father, Chin dedicated her song Hideaway to Crooks, who she described in an earlier Instagram post as the man who has been there through "all the good, the bad and the yucky bits".

As she sang, the camera focused on Crooks, showing him rocking away as she delivered what is undoubtedly her most popular track.

When the track ended, Crooks went over to his wife and the two embraced as her set came to a close. Chin also served up several special moments as she executed songs like Messenger and Loving You.

From the catalogue of hits she performed on The Voice, she also delivered Underneath It All and Bridge Over Troubled Waters.

She made way for Virgo, who was celebrating his first Father's Day following the birth of his twin girls in January.

He dished out hit after hit as he delivered songs such as Fade Away, Taking You Home, Leave People Business and Mi Caah Sleep.

But, apart from his impassioned plea to protect the children, one of his sweetest moments came just before he sang In This Together.

He dedicated the performance to his wife, Elizabeth, and their daughters before proceeding to hit every note with precision and emotion.