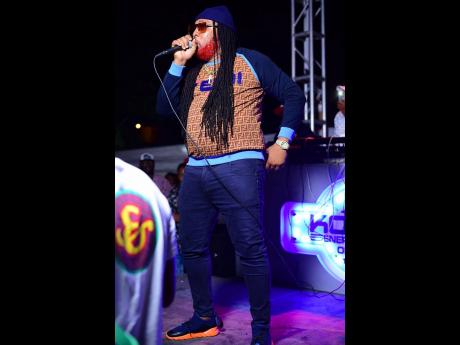 Entertainer Alozade is counting his blessings as he is now at home recovering from what doctors diagnosed last Tuesday as a stroke.

Alozade, whose given name is Michael Sterling, told THE STAR that he was admitted to Ward 18 at the University Hospital of the West Indies (UHWI) where he spent two nights, after a CT scan showed that there was bleeding on his brain.

"Bwoy, mi a give thanks fi life," a very upbeat Alozade said when THE STAR caught up with him on Sunday, while he was celebrating the 14th birthday of his son, Dejaun.

"It all started early Tuesday morning when I got up to use the bathroom and I felt like mi foot dem sliding and missing. I said, out loud, 'So a wha' really a gwaan?' and realise that me a talk with a lisp like Ele," he said, intent on keeping some humour in the situation.

He said he assessed what was happening and concluded that he could possibly be experiencing a stroke, and he said he had a quick chat with "Jah Jah" about it.

With the assistance of his partner, he got ready and called his sister to take him to the doctor.

"When she came over, she told me to take off the mask and said my eye looked droopy and my face was slightly twisted. We went to the doctor who told us to go to UHWI immediately. I told my babymother that I wanted to get something to eat first, but the doctor told us to go straight to the hospital," Alozade said.

At UHWI, he waited about five hours before he was attended to. "But I am not bashing them. They treated me like family, so respect to all the doctors and nurses. There was one nurse in particular who was very attentive. Always checking in on me. Maybe she like the yute true him cute," he laughed.

The deejay's quick recovery from the haemorrhagic stroke is surprising even to his doctors, and he acknowledged that this had a lot to do with the prayers from friends and family, and intervention of the Most High.

"My speech is back to normal and I give thanks, so with a little physio and time to heal, the body will set itself straight," he said.

The dancehall artiste, who had his first success in 1999 with Street Dreams, on the In The Streets label, had had a major Jamaican hit in 2000 with Bad Man Nuh Pet Gal.

He began working as a producer for his own South Block label, having hit singles in 2004 with Capleton ( Inna Her Heart) and Elephant Man ( Keeping it Jiggy).

In 2004, he toured Europe, performing in countries such as Italy, France, Hungary, Belgium, Norway, and Switzerland.

At the end of 2012, he released the single Justice. He has been promoting his latest song, Hoola.