Delomar opens up about biggest fetish 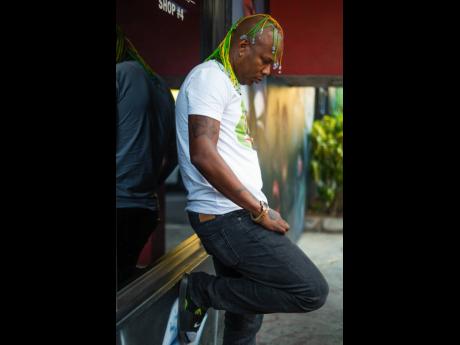 Dancehall artiste Delomar says he has been strategic in coming up with topics to sing about, and he has no doubt that freaky topics will resonate with music lovers, particularly females.

Delomar, known as being one half of the musical duo RDX, talks about his biggest fetish - having his toes sucked, in his latest single, Dweet. He told THE WEEKEND STAR that every line of the song is a true representation of the things that arouse him.

Explaining the thought process behind the materials he now creates, Delomar, whose given name is Andre Bedward, said that ever since he decided to embark on his solo career, he knew he had to come up with content that would create a buzz.

"When we (RDX) decided to do some solo projects and I stepped out, I was like, 'How mi a go approach this?' Because mi a say to myself mi affi create an impact because most people know Delomar as a chorus singer and for dancing songs," he said.

In Dweet, Delomar sings: "Run yuh tongue all ova me body gyal, me waah yuh dweet," even as he promises his partner that he will " wisper dirty tings inna yuh ears fi mek yuh whine slow."

"This song is just me being honest. Mi find the first line and a talk bout weh mi woulda want from a girl and so mi make it known say one a di things mi enjoy is when a girl suck off mi toes, which I have, in real life, got like a million times," he said.

But Deloma is aware that toe-sucking may not find favour with everyone.

"A nuh every man a go get dem toes suck off because there are levels to this things. Yuh affi set yuhself a way that the woman respect you to that point weh she woulda do anything for you. Is not a force thing innu, so any woman weh do it a comfortable dem comfortable. Sometime I don't even wah my toes suck off and a woman jus go fi mi toe dem," he laughed.

"When a man experience him toes get suck off dat mean him woman have a certain level of respect and loyalty fi him."

Delomar believes that there will soon come a time when Jamaicans will be speaking about their fetishes, such as having their toes sucked. He reasoned that when Baby Cham, in Boom, sang ' a which gyal and which gyal a say she nah su*k', he was chastised."

"So probably next year yah go hear baay man a sing bout this suck off toe sumpn. I am a trendsetter, naturally. I look into music and I set trends, and this is not me bragging. This is just what it is," Delomar said.