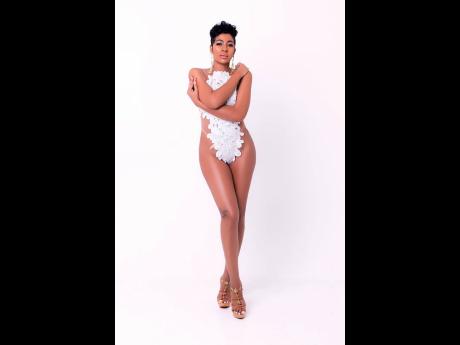 A song that came about from an uncensored, impromptu response to a 'hater' on social media opened popular Internet sensation Queen Ladi Gangsta to the prospects of a serious music career. Since going viral in a one-minute video on her Instagram page in March, the aspiring entertainer officially released her debut single, Double Tap, and its accompanying visuals, which to date has more than 250,000 views on YouTube.

Now 'the Queen' is seeking to gain even more exposure from the track and has enlisted the support of D'Angel. The duo is getting ready to drop the official Double Tap remix and music video.

"I never expected Double Tap to get this big, not one bit. How the song came about,enuh, was just me answering someone who provoked me on Instagram," Queen Ladi Gangsta said.

"The person was sending me some very disturbing messages and mi get upset and send mi private part to her trying to insult her. Dem put it on the Internet and it went viral, so instead of making it get me down, mi just build the song as a defensive thing," she added.

Queen Ladi Gangsta and D'Angel met up after she made a recent trip to Jamaica. She said they struck up an instant connection and decided they'd work on the Double Tap remix.

"Di people dem a guh love it. It a guh sexy and fun, and showcase the best of the Queen and D'Angel."

For her part, D'Angel describes the Double Tap remix as "one of the most unplanned projects", even as she encourages music lovers to "brace yourselves for a high quality, sexy video".

"I've loved the track since I first heard it. It is catchy and popular, undoubtedly a hit. Working with Queenie was easy, she's not a fussy person. She brings energy and excitement wherever she goes and I think she'll be a force in the business. For one, she surely has the fortitude for it. In this industry you can't have thin skin or be affected by what the masses say about you. It's easy to be discouraged by the negativity that accompanies being in the public's eye. Queenie proves daily that she can't be broken down by naysayers," D'Angel said.