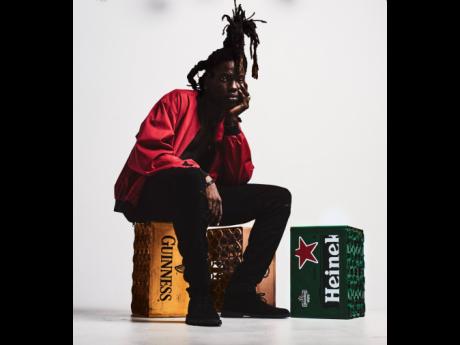 Singer and songwriter Blvk H3ro sees himself as a cultural ambassador and his sermon is positive vibes and youth upliftment, which he says are especially needed in this disturbing era.

"I need to stay clean and provide a different avenue for the youth. What we need is more skateboards, more skate parks and less guns," the Original singer stated.

The Rastafarian entertainer has been giving his full support to the Freedom Skatepark and Youth Centre in Bull Bay, St Andrew, and says he is pleased that the first time it went viral was after he posted it on Twitter.

"It's a joy to go there and see all types of people enjoying themselves. After I made that post so many people asked me where it was, and even Sandals sponsored the project," he told THE STAR.

The park was completed last May, and the main sponsor is Flipping Youth's founder, William Wilson. In a Gleaner interview last September, Wilson said the aim is to "work with a large number of young people, rather than focusing too much on a few elite athletes that might take Jamaica to the Olympics. We really want to work in communities that are suffering with high amounts of violence and to provide opportunities for them."

Wilson said the project was inspired by the killing of Jamaican skateboarder Andre Thompson, who wanted to use skateboarding to help lower violence among Jamaica's youth.

Blvk H3ro says he supports the venture by doing his television interviews from the location, and even when he is told that he can have it to use free of cost, he still pays. "We need a skate park in every parish," he said.

The artiste, who recently released the single Go Fi Mine (Chop E Line) is big on ambition, and explained that he deliberately used the term 'chop e line' as a subtitle for the song.

"It is an expression that means hustling or going towards an ambition/goal in life. But it has a kinda negative connotation and I wanted to show that everyday people 'chop e line'. So I took it one step further to show how jobs like driving a taxi, working on a construction site, roadworks, are also a form of 'chopping e line'. You don't have to be a scammer to chop e line," he said.