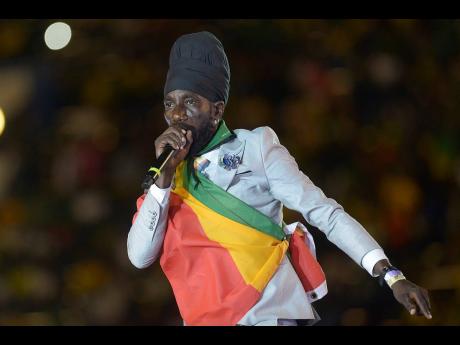 "The people are very well comfortable in their community," said Sizzla of the state of August Town's residents.

The legendary recording artiste has been keeping busy going about his usual activities from recording new music to interacting with residents, and does not seem disturbed about the reports of sporadic gun violence that plagues the community.

"Except the upsurge in violence which they are trying to curtail, I would say the community is stable. People are still operating their business. The children are spending more time online and August Town remains vibrant even while observing the curfew and protocols set in place," he said.

Last year the community recorded seven murders and 14 shootings between January and July but the level of crime and violence has reportedly decreased. Residents have commended the Zone of Special Operations (ZOSO) for its involvement in making changes, but also lamented the need for more social intervention.

Sizzla, who has established Judgement Yard, which has been a sanctuary for youths living in and outside August Town, expressed that, "there is always room for improvement."

Speaking recently on the 'build phase' of the different ZOSOs, Omar Sweeney, deputy chairman of the social intervention committee and managing director of the Jamaica Social Investment Fund (JSIF), said that the reforms being implemented would not trigger a revolution in the short term. He also stated that it could take a minimum of six years to have an impact in terms of transformation.

The Simplicity artiste agreed that the amount of time and investment it takes is almost unpredictable.

"We are all someone's children, so despite a little downfall, there is less need to speak bad of the matter at hand and more need to work on it to get it curtailed," he said. There are several projects he is laying the ground work for, which he said will serve to build and grow the community in the right direction.

"As a resident from the community, I am feeling good; I am very intimate with the community and continue cheering on the citizens because if one person doing well, he or she is doing it for all, just like if one is doing bad, then it will affect all," Sizzla said.