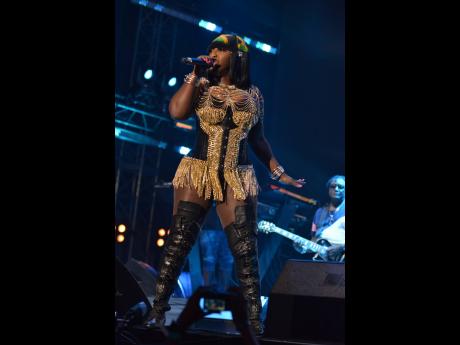 Dancehall Queen Spice has been busy over the past few days trying to hand-pick members for her team in Atlanta, but is assuring Jamaicans that the island will always be 'home'.

"Since I started spending more time in Atlanta, I had to always wait until I go back home to Jamaica to shoot a music video because that is where my team is. But when I am in Atlanta, I don't want the work to stop for me. I want to be able to have music video directors, dancers, make-up artists, content creators, a full team here so the work goes on," she said. "That is the real reason why I am expanding Team Spice in Atlanta and the whole reason why I am doing the job fair. It doesn't mean I am done working from Jamaica. That will never happen because Jamaica is where my heart is, that is my home base."

She added "There is a love I have for Jamaica, my people, my supporters at home that will never die. But I have to build a team here because expansion is critical especially as an international artiste."

Spice announced early last month that she was looking for persons to fill a number of positions on Team Spice and she told THE WEEKEND STAR that the job fair was a huge success.

"I had quite a number of people showing up, so much so that I wasn't able to audition everyone based on the massive turnout. Right now I am going through all the applicants to select the best ones. I have seen persons who are good picks, especially the dancers," she said.

Spice revealed that her complete ATL Team Spice will be unveiled on April 30, which is also when she is expected to drop another single from her upcoming album, Ten, scheduled for release this summer.