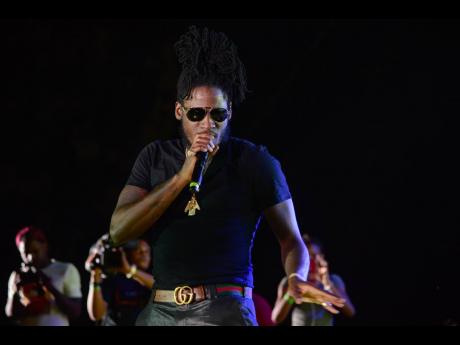 Recording artiste Aidonia is ready to return to the stage for live performances but he is not open to performing at every event.

The U Know The Vibe deejay said that even before the reopening of the entertainment sector, he has been getting requests to perform at various shows in Jamaica and elsewhere around the world, but has been careful about the bookings he accepts.

"Everybody a try get a jump-start right now, but we still kinda picky or careful to choose," he told THE WEEKEND STAR. "At the end of the day, we have to protect the brand [so] I am keeping it exclusive."

Aidonia is slated to make a guest appearance at the finals of the Guinness Sounds of Greatness. The dancehall star said that the event is a must, having played a significant role in him going in the direction of entertainment.

"A part a di culture we grow up on -- sound clash between Bass Odyssey and Fire Links -- we actually love and endorse the clash culture. The first one I ever see is watch I watch it on a videotape. When we reach a levels fi see real sound clash, it was Bounty [Killer] and Beenie Man. Mi bigger bredda say overloaded, and I witness it live at Fully Loaded," Aidonia said.

The finals of the Guinness Sounds of Greatness comes roughly a week after the COVID-19 inducted lockdown measures were lifted from Jamaica's entertainment sector. Aidonia, whose given name is Sheldon Lawrence, said that he used the 'lockdown' to spend more time with his family.

"Over the years I was actively travelling. I've literally been home for what is almost two years because we have a family, we not risking anything by going here and there," he said.

"It was crazy... It felt like jail time being home (sometimes), but I am fortunate to have a studio at home, where I could continue recording.

Speaking of music, Aidonia shared that he was focused on releasing tracks on a seasonal basis. From March 2020 - March 2021, he has had several singles accompanied by visuals including Look, Oh Ye and Dat Eazy that have received more than one million views.

He also revealed that he has also taken up gardening as a pastime and was not bashful when it came time to share how skilled he is at beautifying his yard.

"I did a lot of planting -- from flowers to trees -- and I even made a water feature with a stream and everything, just some yard tings. As the family man, I also invested a lot of time playing with my son, who is eight years old now, as well as my nephews, and cousins. Sometimes dem deh bout, and within our circle, we get together and cook some food, because we know when the road fully open up it a guh be hectic," Aidonia said.