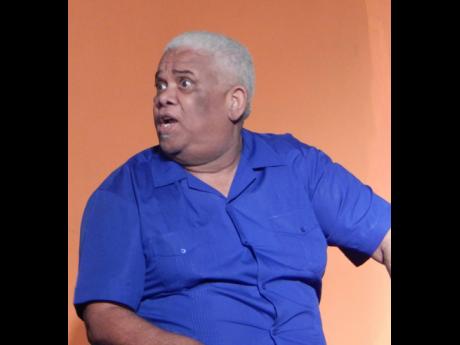 Widely hailed as one of the most genuine actors of his generation, Volier Johnson formed close bonds with many theatre professionals. Directors, playwrights, fellow actors - old and young - and production crew got to know and love him, said Patrick Brown, a playwright and the owner of theatre house Jambiz International.

"I can't remember a time seeing Volier vexed by, or with anyone," he told THE STAR.

Brown was the original writer for Oliver At Large and creator of the 'Maffie' character, that made Johnson into an even bigger star. The two also worked together as Centrestage Theatre in New Kingston.

"He did the Christmas shows, from the very first one, Oliver and Pinocchio, we continued to work together. He also toured extensively all over the Caribbean, North America and England for the art," Brown said.

"I lost a few friends over this COVID-19 period, but this one rough. He's a brother for me; this is a difficult to digest because Volier and I come from far far," he said, explaining that he is still trying to process that another friend, turned family, is gone.

Johnson, best known as 'Maffie', died at the Kingston Public Hospital on Friday after suffering what appeared to be a heart attack.

From pantomimes like Rip Van Winkle and A Christmas Carol to plays like Crazy But True, If You Live In A Glass House, 56 East Avenue to Frenemy, and hundreds of productions, for music videos and commercials, he remains centre stage in the hearts of theatre lovers and professionals alike.

"He is one of the nicest persons to know. ...That man loved pork but you know, I wouldn't say he had any regrets for the way he lived his life. No bad can be said about Volier either, we had fun times and we'll meet again. I really can't say anymore," said an emotional Brown.

"Him love a pork; yuh waan taste di pork, mi just get it, he would ask. The he would ask, 'yuh eat already' and in the way a parent would ask their child. He has a nurturing, fatherly aura that I cannot forget," she said.

His passion for theatre

Better Mus' Come star Sheldon Shepherd shared similar sentiments. "I love his spirit and his passion for theatre, stage, and acting. He has no toxic ego, a gentle encouraging being. I love his comedic timing, his eyes, his complementing ability, he will comfortably be the 'whatever' for the good of the story. He is the realest I have met and always gave no less than his best," he said.

"So many nuggets were shared over the years, I keep most in my heart and being not necessarily my memory. A striking point to note, I cannot recall him ever being late."

Like most of Jamaica, Shepherd met Volier Johnson from the audience, watching him make theatrical magic. Later, the two actors acted in Strength of a Woman in 2007 then again shared the screen for Better Mus' Come in 2008.

"We continued to relate ever since and maintained mutual respect and friendly acquaintanceship. I call him Sir Volier he calls me 'T'. Don't know is where him get 'T' from [as none of his name start with the letter] but whatever name is bestowed on you by an icon, yuh wuk wid it," he said.