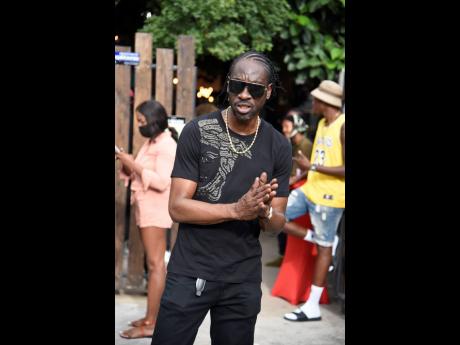 Dancehall royalty Bounty Killer says he is ready to rejuvenate dancehall music, the much-loved genre which, he argues, is in need of redirection.

The 'five-star general', who is getting ready for the release his first album in 18 years, said the music is lacking authenticity.

"Which direction you see dancehall music going?" Bounty Killer questioned. "It's obvious that it needs to be realigned," he told THE STAR, following the official signing party held to mark his new publishing deal with Creative Titans/Concord Music Publishing last Friday.

The entertainer said originality needs to be returned to the local music scene, and says that his soon-to-be-released album, King of Kingston, will be a blueprint of sorts.

"Somebody needs some advice and this is going to be the template. Jamaica's music is great, but for a period of time, recently, the music seems a bit confusing-- musically. Lyrically, we still saying what Jamaican music been saying, but musically, we not playing what Jamaica should be playing," Bounty Killer said.

The entertainer alluded to dancehall artistes taking from other genres and calling the sound a new form of dancehall. He said that with Jamaica having created its own genres of music, artistes should be following the musical blueprint laid out by their predecessors, rather than adopting another genre and calling it their own.

"We playing all kinda crazy things and calling it some new things, and we don't want nothing new. Reggae and dancehall, that's our soul. So, we're going to redirect, realign and recharge dancehall with the King of Kingston, so prepare for thine Kingdom to come," he shared.

King of Kingston, which is said to be 99 per cent complete, is Bounty Killer's first album since the release of Ghetto Dictionary, a double album comprising The Mystery and The Art of War in 2002. The Mystery was nominated for a Grammy for Best Reggae Album. Also in 2002, Bounty Killer won his first Grammy Award for the song Hey Baby, a collaboration with No Doubt.

Bounty Killer revealed that for his upcoming album, there will be a little bit of everything for everyone from every part of the world. The entertainer said he has been working on the project for about a year and has a list of tracks that are guaranteed to make the album a hit.

"Just expect all bombs. Every song is a single that can stand on its own; properly made and properly executed. Yuh already heard Bung Bang wid Busy Signal, and we a guh have Barrington Levy, Vybz Kartel, Bling Dawg, Chronixx, OMI, Busta Rhymes, Snoop Dogg, just to name a few, on the project. I mean, we not gonna tell yuh everybody, but just expect a lot of super collaborations too," he said.

"When I drop albums, I don't do expectations, because that's not a good thing. When yuh expect things and it doesn't work, yuh disappointed. I know that I am making a good project, so I am expecting people should like it and that's all. I don't know what sale it's gonna get because I am not making music for just the sales. I am making music for the details. I want to see how people gravitate to it, how long people talk about the project, and how much people remember it," Bounty Killer said.