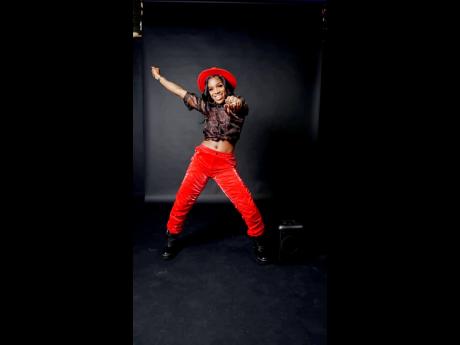 When dancer-turned-artiste Tallup released her latest single, ' Waistline', in June, she predicted the song would become the hit and that it would help her cement her place in the industry.

Fast-forward two months and not only has the track earned the artiste her first taste of YouTube trending success, but it has also handed the entertainer her first million views on the popular streaming platform. With these recent achievements under her belt, the artiste says the music industry should brace for a 'Tallup takeover'.

"I am a trendsetter. I've been setting trends from I was a dancer and people have been taking notes, but they will now get to see that I am not a normal person. Just give me time to grow an blossom properly, and people will see how far my talent goes," she said.

"It's going to be a Tallup takeover in dancehall, so keep me in mind because I didn't come to play games."

The entertainer predicted that very soon, whenever there are conversations about the top female acts in dancehall, her name will be in the mix.

"Every time there is a conversation about top trending dancehall female artiste, I have to be included because I effortlessly put in the right amount of work to be recognised as such. People who had doubt can now see that I earned my spot and have the capability to be a force to be reckoned with in dancehall and reggae."

As it relates to the success that has her on cloud nine, the entertainer said she knew from the jump that Waistline would have been a hit.

"I was surprised when it got to the million views mark that quickly but truth is, I expected it. When the audio was released, the feedback I got told me people were really loving the song. With the audio version, the song was already trending on TikTok and Instagram. I anticipated the love to increase once the music video was released and that's exactly what happened," she said.

"The track effortlessly reached places I could have only dreamed of because of the energy that I brought to the song. That along with the riddim the song is on and the dancing made it a hit with the people."

Now that she has got the hit she had been waiting for, Tallup says she wants to continue levelling up. The entertainer says she is getting ready to release a new single titled, Wally Jump, inspired by dance moves created by social media influencer Wally Dee.

"Wally Dee is a personality that people love and so I know with her inspiration, this song is already going to be a hit. The track is produced by College Boyz and I just expect the same greatness from this one," Tallup said.

"From now on, every time you hear my name or listen my songs just know there is a lot more where that came from. I predict the year will finish with me finding a global hit that will shake the world."