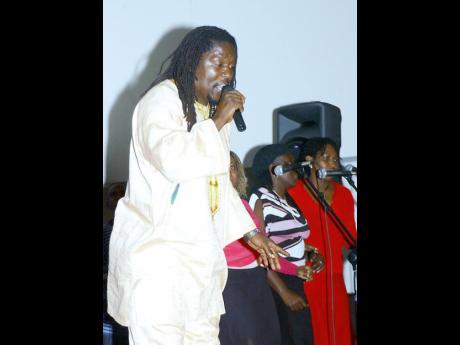 Veteran reggae singer Mikey General is working on a new album, Hold a High, which he hopes will help people navigate the adversities of the pandemic.

"If you study the pandemic, you'll notice that a lot of people are suffering from mental health crisis," Mikey General told THE WEEKEND STAR.

"A lot of people have not been able to communicate with their friends and family, old people are having a hard time, and many things are happening which cause people to be depressed and that affects their mental health. This album is music they can play in their home to strengthen and encourage them. Anything to uplift the people and give them strength, that's where I am."

A study conducted in August 2020 by Professor Wendel Abel and a team at the University of the West Indies, Mona, found that 55 per cent of participants admitted to depression and anxiety, while 97 per cent said that they needed psychosocial support or "an opportunity to ventilate".

Mikey General said his psyche has not been negatively affected during the pandemic. "I'd more say it has gotten me closer to the spiritual side. My inspiration hasn't diminished either, if anything it has added to the spiritual content."

Fans can experience this when he releases the album early next year. Hold a High will bear 11 tracks produced by London's Reality Shock Records. His last album, We the People, was released a little over a year ago by Footprintz Music Group.

His other albums include Tewahedo, Sinners, African Story African Glory, I' m Just A Rastaman and Spiritual Revolution.

Mikey General's latest release is the title track for the Greater Glory rhythm, released by I House Productions on October 8. The project is an ode to St George's College and thus features artistes who are past students.

"I did the title track which is the motto of the school and it's a very good song," he said. "The message is really one to tell you to explore your higher self so when you are going for the greater glory of God, you're not thinking little, you have to think big."