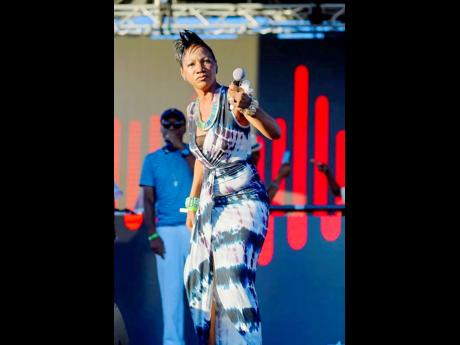 As a veteran deejay, Lady Ann has seen enough moons to confirm that lesbian artistes have always been in the Jamaican music industry. However, she is perturbed that the sexual orientation and interests of Lila Ike and Jada Kingdom are being interwoven with Jamaican music.

For Lady Ann, she has made too many sacrifices for female artistes to enjoy an improved industry today, only to have that muddled by their personal affairs.

"Dem have to remember, a me a di first lady," Lady Ann told THE STAR. "Yuh know how much abuse me go through fi escape all kind of rape, attempted rape, molested inna voice room as a little young teenager, just to make the music be where it is fi you come now and a mek people talk negatively about it? Mi nuh like it."

She declared that she does not discriminate against members of the lesbian, gay, bisexual, transgender and queer community, adding that she even has family members and friends who are of those orientations. Her discontent is rooted in her belief that some artistes use the music industry as a mask to conceal certain lifestyles.

"Nothing is wrong with you being gay because that's your life and your choice, but don't use the music to cover up your gay lifestyle," she said. "Just like some people come inna the name of the Lord, Jah or Rastafari, don't use the music to cover up your sardine behaviour and when you feel like you reach, or you feel like yuh buss, then you come out and say, 'Oh, my name is so and so and I do reggae and I'm into woman'. No, that's the only part I don't like because yuh nah only a sardine up the music, yuh a tear it down."

Lady Ann said that there are veteran artistes of certain sexual orientation who have kept their personal lives private.

"Yuh have some veteran female deejay weh mi know gay and nobody nuh know and people still love them and think dem righteous, but dem know mi know dem gay, that's why dem fight me and push me away," she shared.

"Mi and Sister Nancy save one a dem already when we did a do one Sting. When we go a rehearsal, di band member waan chop dem up cause him seh dem inna him house a have sex every day. A me and Nancy haffi hold on pon him and mek dem escape outta di house so a nuh just now. We never have social media and dem never loud it up. Even now, dem still shame of making people know they're gay, they will not come out and say it."

She said younger artistes should either learn how to "come out properly" (by not linking it to music) or don't say anything.