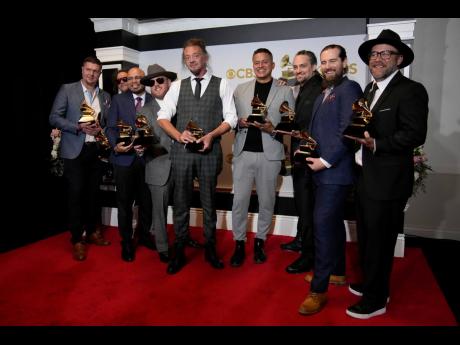 SOJA, winners of the award for best reggae album for ‘Beauty in the Silence’, pose in the press room at the 64th Annual Grammy Awards at the MGM Grand Garden Arena on Sunday in Las Vegas. (AP Photo/John Locher)

American band SOJA has been receiving flak from several Jamaicans for being "culture vultures" since winning the Grammy award for Best Reggae album for their 2021 release Beauty in the Silence.

"This group has been out there working for a long time," Hamilton told THE STAR. "As a matter of fact, this group normally go to live stage shows in Washington, DC, and listen to culture and all different genres of reggae coming out of Jamaica. Even as kids they played reggae music; no rock or other genres. They grew up on this music. They aren't culture vultures."

Hamilton, the sound engineer behind Shabba Ranks' Grammy-winning albums Xtra Naked and As Raw As Ever, was first introduced to SOJA in 2010 while on tour with German reggae singer Gentleman.

"They were the opening act for Gentleman and they approached him and said, 'We need an engineer like Soljie because we have a band but we don't have a sound'. They wanted to get a reggae sound and that's where I started working with them," he recalled. Hamilton worked with the group for five years and helped them attain their roots-reggae sound, and even toured with them where he witnessed the impact of their music.

"They've been playing to massive crowds all over, especially in South America, 25,000, 40,000 [people], but they live normal. They're just ordinary people. There's nothing hype about them. I remember we played somewhere in Poland and there were a million and odd people there and they played reggae. Because of their exposure when they were in Europe with Gentleman, that's where it built up from and they had their following in the US as well," he said.

"Reggae belongs to Jamaica but it's a music that everybody loves so they are going to play it," he said. Etana, Spice, Jesse Royal, Gramps Morgan and Sean Paul were the other nominees.

Based in Virginia, SOJA, which stands for Soldiers of Jah Army, was formed in 1997 among high school friends who made their recording debut with their self-titled EP in 2000. They have recorded seven albums, earning two other Grammy nominations for their 2017 album Live in Virginia and Amid the Noise and Haste released in 2015.

Hamilton did not wish to get into the debate about who deserved the Grammy or the need for industry players to become members of The Recording Academy to cast a vote.

"I'm just an engineer who shares my talent with any genre of music," he said. "This is just something I love. I'm just for the music."