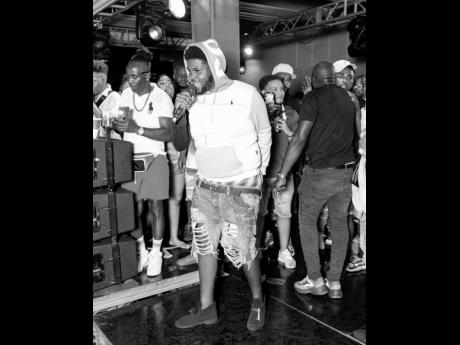 He decided to pursue a music career because he loves attention, and 1Biggs Don has been getting a lot of it for several weeks after a freestyle ignited the viral 'Boy Haffi" dance challenge.

Many may not know the face behind the infectious song, which is actually titled Chop E Line and Buy Gun, but the 18-year-old has been making everyone, including influencers like TC, Dan Dan and Dancing Rebel, make TikTok videos to it.

"I am shocked but I am not that shocked because it's a dream. But mi never know it woulda happen like this," the Manchester native told THE WEEKEND STAR. "Everything weh mi waan fi happen inna mi life, all of my dream and goals, just a fall in place. A music mi love because I like the attention, mi like the whole vibe. Mi like the art of building something out of your head and putting it out to mek the world love it. So it's frightening but yuh kinda waan expect it so you haffi just hold yuh composure and do your best."

It all started last month when YouTubers OTP Control published the video which features his freestyle. 1Biggs Don said he and the content creators are long-time friends and that they'd always asked him to appear in one of their freestyle videos, but he never felt like he was ready. As fate would have it, they encountered each other one day as the up-and-coming artiste was out and about. He finally gave in.

The clip of his artistry has racked up a million views on TikTok, motivating him to officially record the song. The track was written by him and was first recorded with a friend. But he has since decided to re-record it alone with producer Steel Chest of Outta Space Records. He called the producer a mentor of sorts who has helped him to identify his strengths.

"Steel Chest show me seh people nah go expect seh the body type [that I have], the big person a go have the vibes like this," he said. "A just the style and craft to my thing. It's just natural."

The song and accompanying music video are slated for release this month.

Given name Jamal Thompson, 1Biggs Don said that he has always had an affinity for music but only saw himself in the background as a producer until he gave serious thought into what he wanted to do after leaving Porus High School.

"The worst thing weh can come down pon yuh brain a when yuh inna high school a wonder weh fi do with your life, and mi siddung and seh, 'Biggs, weh yuh really like?'. Mi love the attention, mi love the pretty life and the niceness, so mi seh 'Alright, a music yuh like youth'. From there mi start write songs," he said.

With the support of his parents, he made his music debut in 2019 and has since released songs like Jagga, Bad Ground and Funds (featuring Marksman).