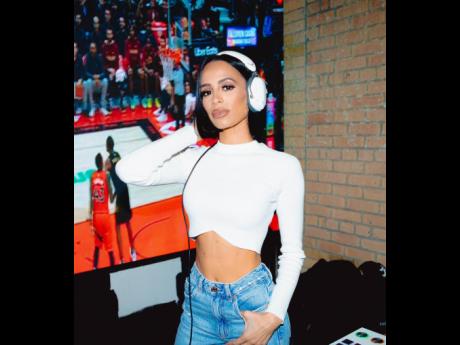 Well-known petite model and disc jockey Gabrielle Davis recently accepted an apology from television personality Erica Mena, three years after a public scandal which had them in a war of words caused her emotional trauma.

In 2019, Davis, also known as DJ Gabby, had exposed Mena's now ex-husband, recording artiste and Love and Hip Hop star Safaree, for being an unfaithful and deceptive man. But she received some unexpected backlash because Mena, at the time, defended Safaree, leaving fans to conclude that Davis was just a 'side chick'.

"My instant reaction was to defend myself and to try and show people the truth since it was twisted in so many ways. But that was pointless at the time. I realised that even if the proof is right in front of you, some people will still make up their minds to deem you as the 'bad guy'. It had me in a bad, weird space for a while," Davis told THE STAR.

The Kingston-born and raised model said that she never experienced anything of that nature prior to her relationship with Safaree, being "typically a very private person" with her personal life. The situation inevitably held her back professionally as she experienced cyber-bullying which triggered her anxiety, resulted in depression and bruised her self-esteem. However, despite the pain and emotions, Davis said she had moved on.

Since the dissolution of her marriage to Safaree, Mena decided to right her wrongs. She publicly shared her Instagram stories with a repost of one of Davis' images: " She deserves a public apology. Which she has accepted on my behalf. Her story and her truth was just an honest warning for me. I didn't want to believe her at the time. Which is a mistake a lot of us women make because we are in denial. When we desperately want to believe otherwise. You deserve your flowers." She also reached out privately to Davis.

"I just had to accept it for what it was then and know that I had to stand and own my truth regardless of anyone's support. I drowned out the outside noise and stayed close to the people who truly knew me. After a while I got used to things and it stopped bothering me. I channelled all my energy into finding myself again and music, that is what kept me busy," Davis said. "Even though I had already moved on without the apology years ago, receiving that apology, no matter how long overdue it may be, for something you never did, will always be rewarding."

Davis' modelling career launched after she placed second in Pulse's Caribbean Model Search competition and reality TV series and she was signed to the agency at age 19. After a successful career as a commercial model locally, she set her sights on the international market and also launched her DJ career. By 2017, she became the first Jamaican to be cast on the first season of VH1's Love and Hip: Miami.

She said as for her career in the male-dominated field, she is going through a process of re-branding and aims to stake her claim as one of few females making waves as a DJ.

"I'm focusing 100 per cent of my time and energy into my DJ career, as things are working out for me in that space, especially in Toronto, Canada. There's a lot on the table for 2023. I plan to explore producing for 2023...maybe an EP or mixtape coming out soon, and I'm also undergoing a rebrand," Davis said.