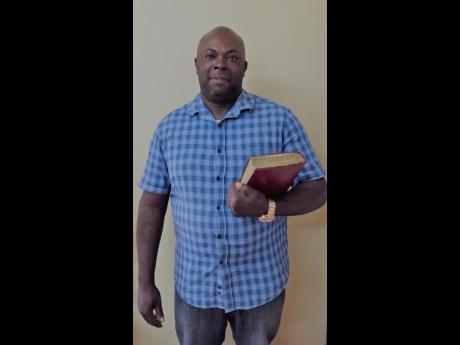 Many persons have shared testimonies of how their lives have been spared by the voice of God. Well, Donald Richards of the Bombay New Testament Church of God in Manchester is one such person.

Richards testified that he was frustrated by a family member over fifteen years ago to the point where he wanted to take his own life.

He stressed that the abuse also included him being denied food, clothing, and a place to sleep. Richards shared that he was even forced to sleep under a street light at nights and that he had to compete with mongoose for a place to sleep at times. He shared that just as he was about to consume the deadly substance, he heard a voice say, ''You shall not die, but live and declare the works of the Lord''. Richards said that when he heard the voice, he looked around to see if there was anyone around, but he saw no one.

"I was looking if I see anybody, but I did not even see a soul. I thought that it was somebody in a mango tree which was close by, but when I realised what was happening, I knew that it was the Lord who was speaking to me. I started to run from the place where I was about to take my life, and from that day until now, I have not looked back. I am running for my life with the Lord," testified Richards.

The churchman shared that since that day, the Lord has had His hands upon his life. He added that although it has not been easy, the Lord has been keeping him.

"Since I accepted Jesus, it has been challenging, but it has been good. I must say that prior to accepting Him in my life, I did not believe that He cared about me. But I have come to realise that He really cares about me. Jesus has opened up many doors for me since I gave my life to Him. He has been really good to me, and I cannot complain," testified Richards.