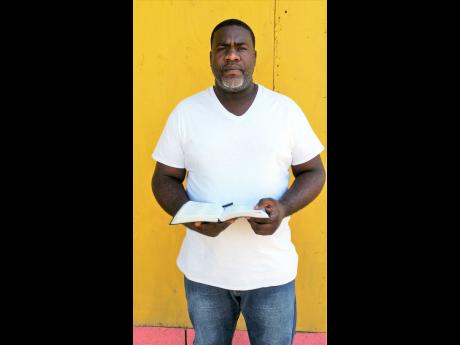 Davie Blair, like many individuals, knows that there are no challenges that the Lord cannot help him to get over.

Blair, who is a member of the Living Water Apostolic Community Church at Four Paths in Clarendon, got baptises in February and testified that his life has changed significantly since then.

"The Lord has done so many things for me. I have been going through some challenges since September of last year, but since I accepted Jesus Christ as my personal Saviour and Lord, He has been removing all the obstacles that I have been facing, one by one," testified Blair.

In addition to his prayers, he said that other persons have prayed for him and that God has been answering their prayers.

"The pleasures of earth had me down, and because I have become dedicated to the Lord, He has helped me to remove many obstacles. I have been going through several challenges, including the loss of my mother two years ago to cancer. Then I lost my job," Blair said.

Blair shared that he used to feel depressed, and his days were mostly sad.

"Since I have found the Lord, I won't say, that there have not been any sad days. However, I am now aware as to how best to deal with them because I am now stronger because the blood of Jesus has given me strength as a Christian," said Blair.

He admitted that his walk with the Lord has made him happier.

"I am emotionally at peace now with myself. I made many mistakes in the past at home, at the workplace, everywhere; but since accepting Jesus, I am more at peace, and I have forgiven myself for the things I did before. It was really challenging to forgive myself for the things I had done. I have now learnt how to handle those," testified Blair.

Now a devout Christian, Blair says that his new life has allowed him to focus more on God.