My Testimony: The Lord made a way for me 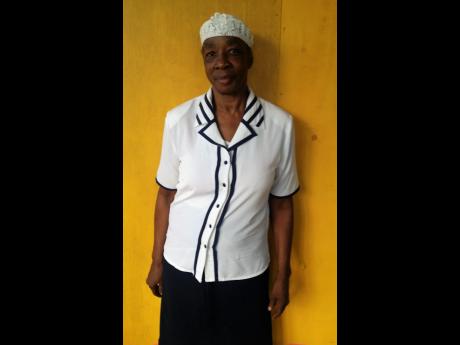 The woman in the Bible who had an issue of blood for 12 long years said: "If I could touch the hem of His garment, then I would be made whole".

Such was also the thinking of Shirley Smith of the Living Water Apostolic Community Church in Four Paths, Clarendon.

Smith testified that she was a security guard working in May Pen some time ago, and she surrendered her life to the Lord last year.

"I went to work one day, and suddenly, I was unable to walk. I was admitted to the May Pen Hospital and had to do an MRI. The doctor did not find any complaint. Somebody then introduced me to the Living Water Apostolic Community Church and the bishop. Even when I went to the church, I was still unable to walk," said Smith.

The woman of faith said that one side of her body was partially crippled and that she needed help to get things done because she was not able to do things for herself.

But one day, things started to turn around for her.

"When I started to attend my church, I surrendered my life to Jesus Christ. I got baptised in July of 2017. That was when I gave my life back to the Lord because I was saved at another church before. Since then, the Lord has been so good to me in so many ways," bragged Smith.

She disclosed that she touched the spiritual hem of Jesus' garment, and since then, her health has changed for the better. Smith added that not only has her health improved, but God has also been providing for her financially.

"There were bills that I was unable to pay. I had difficulty paying my electricity bill and rent because I was not earning due to my disability. But the Lord has made a way for me. The JPS (Jamaica Public Service) man came to my house to disconnect the electricity, and when he saw the condition in which I was, he had sympathy on me and did not do so," testified the church woman.

She added that before the JPS worker came to her house, she got a message from God that He would not take her thus far and leave her.

"After I surrendered my life to the Lord, I realised that I was able to walk around with a stroller. I can go to do therapy by myself, I can wash my clothes, which I could not have done by myself. Someone would have to bathe me, comb my hair, and so on. But now, I am alone. I can wash, I can cook, and I can now clean," Smith said.

She further testified that when problems try to get her down, she goes down in prayer and meets God, who is always there for her.

"Because of that, my aim and my desire is to continue to hold on to God. God has really been good to me throughout my illness," shared Smith.