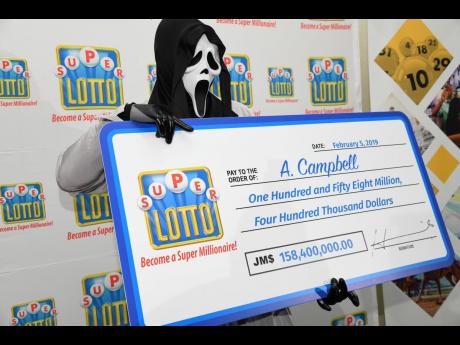 A. Campbell, the fourth Jamaican winner of the Super Lotto, poses with his cheque at the Supreme Ventures Limited press conference yesterday at the Spanish Court Hotel. Campbell won J$158.4 million. 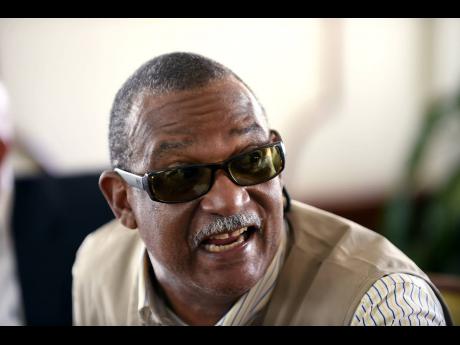 Jamaicans have won the Super Lotto four times since the game was introduced in 2009.

But apart from an initial and a last name, persons are left guessing the true identity of the winners.

It is a common practice for winners to disguise themselves when they collect their cheques.

These costumes can range from a wig and sunglasses, to the winner donning the costumes of cartoon characters. Ultimately, their aim is for no one to recognise them.

The latest Super Lotto winner, A. Campbell, showed up yesterday to receive the cheque wearing a mask, popularised by the Scream franchise, complete with a full cloak.

Gail Abrahams, vice-president of marketing communication and sponsorship at Supreme Ventures Limited, says the winners have a choice as to whether or not they want to wear costumes.

And if they choose to do so, then Supreme Ventures provides some assistance to them.

“Should they require any form of costumes, we will definitely assist them in the process if they request it,” she said.

She pointed out that of the different Caribbean countries where Supreme Ventures operates, it’s mainly the Jamaican winners who choose to hide their identities. She says this is purely for security reasons “they may be harassed, or whatever reasons that they may have security concerns, we do understand,”

Meanwhile, Robert Finzi-Smith, a security expert, says Jamaican winners of the Super Lotto are saving themselves a lot of trouble by hiding their identities.

“What happens is that people bad mind people fi stuff, there’s no if or but, or maybe. So it’s only right, if you’re allowed, to conceal your identity. It can’t save you the entire way, but it will reduce a great deal of the stress otherwise,” he said.

He said the unexpected fortunes of the Super Lotto winners also make them vulnerable for exploitation.

“Once somebody knows that you’ve come into a sum of money, a little larger than normal, you suddenly start to find that you have relatives that you didn’t know that you had. Jamaicans tend to have a feeling that if you don’t become a benefactor to everyone near and far, then you ‘mean’, and you’re no good,” he said

He added that these winners should be mindful that once they come into new money, they are targets.

“Lascelles Chin and Michael Lee Chin might earn multiples of that, but they are regarded as untouchable and people have gotten used to them having it. A man next door who suddenly comes into it (money), is a target,” he said.