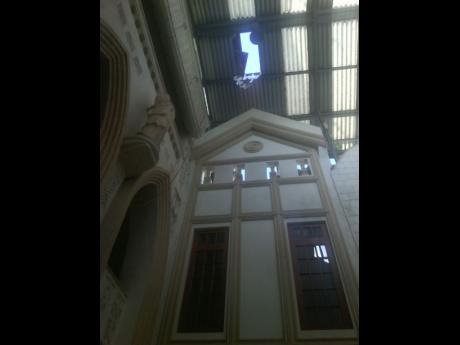 Gareth Davis The roof where Michael Jones reportedly fell from

worker, who fell through a roof at the Royal Mall building in Port Antonio, Portland, yesterday, died upon arriving at the hospital.

The man has been identified as Michael Jones, a resident of Rice Piece Road and the nearby community of Stony Hill in the parish.

It is reported that about 3 p.m. Jones was on the roof of the building carrying out repairs, when a section of the roof collapsed under his feet.

Jones reportedly fell from the third floor and crashed on to the concrete pavement on the ground floor inside of the building.

He was rushed to the Port Antonio hospital in an unconscious state, but was pronounced dead on arrival.

A police source said that at the time of the incident, Jones, was not wearing any safety gear. The Royal Mall building is currently undergoing major renovation.