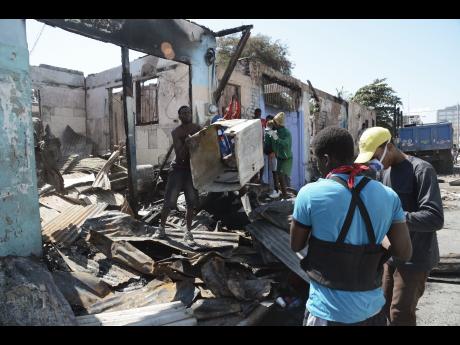 Norman Grindley/Chief Photographer Victims try to recover their possessions after the fire on Barry Street and Rum Lane in downtown Kingston yesterday.

Fire of unknown origin destroyed four dwellings on Barry Street and Rum Lane in downtown Kingston yesterday. There were no reported injuries as a result of the fire, the police said.

According to the Gold Street police, fire engulfed a property on Barry Street and quickly spread to the other properties. The fire department was summoned and units from Half-Way Tree, Rollington Town, Trench Town, and Spanish Town fire stations extinguished the blaze.

The police said about 100 persons have been left homeless.

The value of the houses destroyed has not being ascertained, neither was it known whether the dwellings were insured.

The police said further investigations are being done to determine what caused the blaze and see if there is anyone responsible.