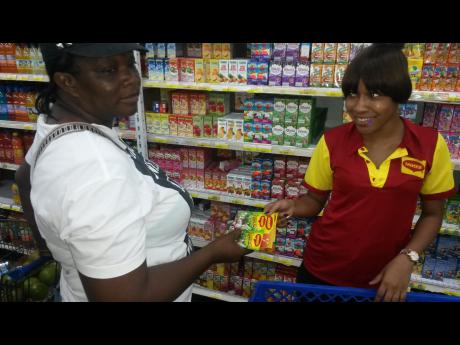 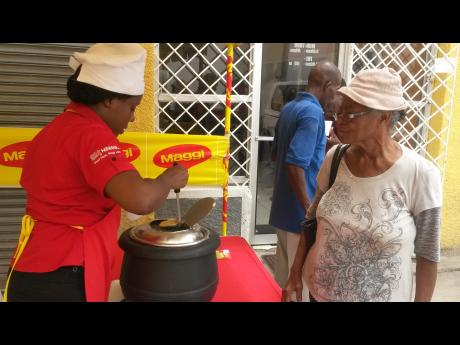 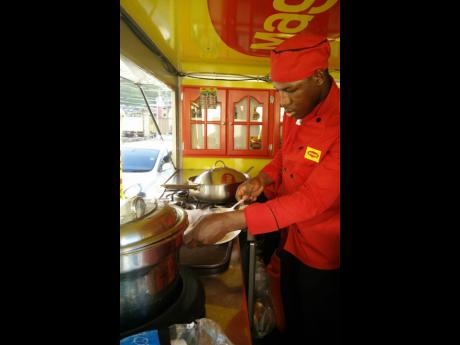 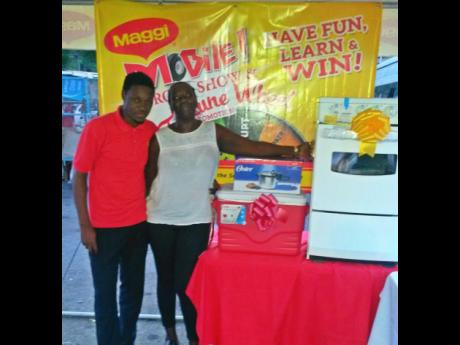 Andrea Byfield, winner of the main draw - the Maggi Fortune, share a moment with Xavier Scarlett.
1
2
3
4

It was hot, unbearably so. and One could easily feel trapped in the sweltering heat last Saturday in Port Maria, St Mary,

Andrea Byfield had business to do in the town close to midday but had to hurry into Hi-Lo supermarket to get juice in an effort to cool down.

Everything that happened thereafter was simply magical. Byfield is still pinching herself in disbelief as to how events unfolded.

She had not stopped in the car park to take stock of the Maggi promotion but was unable to bypass the charming and persuasive in-store promoter, Presilla Gonzales.

"I remembered that I also had to buy cock soup for my son, and my children don't want anything else but Maggi because they insist it's the one with a special flavour, so I started listening to what she had to say," Byfield recalled.

Presilla won her over and she bought what was required to be a part of the Maggi Mobile Road Show and Fortune WheelPromotion, six packs of Maggi products (she actually bought 6 soups) and returned to the festive activities outside for a chance to win an instant prize at the spinning wheel and the main prize to be drawn in the evening.

She won a lunch bag and thought that was the end of that.

"I was tempted to stay. Everything was being sampled - from di chicken soup wid all di vegetables - a nice one-pot blend to odder tasty recipes, some a dem mi caan even memba dem name," she said.

Byfield was referring to the other dishes being sampled by chefs Jahnoy and Curtis throughout the day from the mobile kitchen - coconut cabbage, polenta (Maggi coconut and evaporated milk, cornmeal, kidney beans, mixed vegetables, salt fish and other ingredients) and vegetable fried rice (with Maggi Cock Soup with pumpkin).

There were also keep-fit activities being conducted by nutrition adviser, Nordette Morrison.

She, however, went on her way. However, sometime around 7 p.m., while she was in Ocho Rios, St Ann, she got a telephone call.

Caller: You are the winner of the main draw of the Maggi Mobile Road Show and Fortune Wheel Promotion - a four-burner gas stove, pressure cooker and large igloo - which we call the Maggi Fortune Combo.

"Mi have a four-burner gas stove but two a di burner dem naw work, an yu know how long mi want a pressure cooker. Mi whole family nice now. An wen wi a go out wi can pack di cooler, all a di dis thanks to Maggi," she said.

The promotion will be at Consumer Meats, Barnett Street, Montego Bay, St James this Saturday.