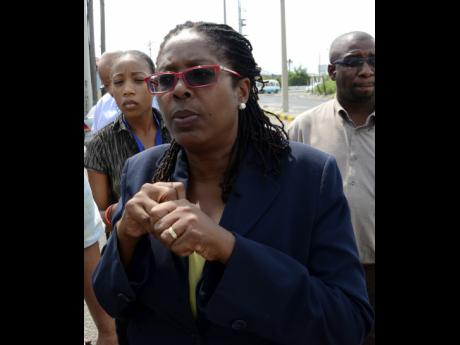 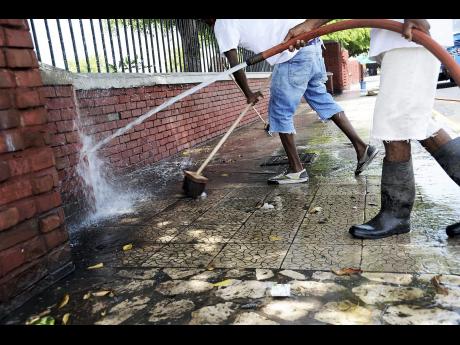 File Workmen wash away the urine stains the area around the St William Grant Park in downtown Kingston. 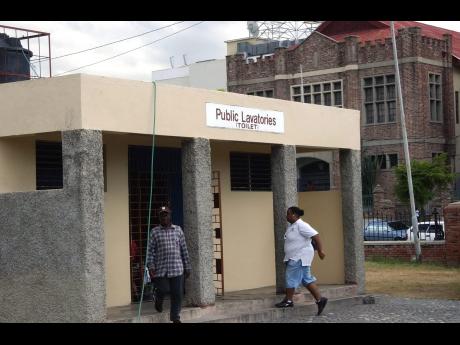 St Williams Grant Park is being used as a pilot to determine how the KSAC approach the handling of public sanitary conveniences.
1
2
3

Walking through the streets of downtown Kingston, one is often greeted with the stench of urine rising from the corners of buildings and the corroded drains filled with plastic bottles and drinks boxes.

The Kingston and St Andrew Corporation (KSAC), which is responsible for managing public sanitary conveniences throughout the council's jurisdiction, told THE STAR that there are seven public sanitary facilities in downtown Kingston. The St William Grant Park facility has five toilets.

But when THE STAR news team visited four of those facilities downtown last Friday, the collection of a contribution at the doors at the facilitiessometimes mandatoryseems to be a deterrence to the public.

One vendor at the Old Gas Station Arcade told THE STAR that he refrains from using the facility in that arcade because of the strict fee of $50 that is imposed for every use.

"One day I had running belly, and every time I go over there I had to pay $50," the vendor said.

"Some days I am here and I don't sell one shoes and it hard to pay $50 every time I want to pee."

The vendor said: "An das why we p*ss inna bottle and throw it inna di drain."

However, the operator of the sanitary facility in the arcade, Georgia White, said that use only requires a contribution.

"Sometimes dem come wid $20 and we give them. For example, da man deh always come and pay; and see him come deh and ask mi fi a use and mi give him because him always pay," White said.

"Even though we have so many facilities, people still pee outside. Dem adamant not to pay, so dem rather use outside."

THE STAR understands that the KSAC hires contractors to maintain the facilities.

Mayor of Kingston Angela Brown Burke said that the KSAC has made an unsuccessful attempt to remove the pay-to-use system.

"What we had done last year, when we realised it was an issue, is to have a no-compulsory fee," Brown Burke said.

"That's what we were encouraging, however, we wanted individuals to leave a tip, and we haven't really revived it, so we have kind of left it."

Brown Burke said that the five facilities at St William Grant Park are being used as a pilot model to find out how the council should approach the handling of public sanitary conveniences.

When THE STAR visited the facilities in St William Grant Park recently, a tip of at least $20 was required to use the facilities.

"The truth is that they know that if you have nothing to give, then you should be allowed to use the facilities. But we encourage a tip because the facilities need to kept clean," Brown Burke said.

But while acknowledging the economic constraints for those who need to use the facilities, the mayor said the mindset of Jamaicans needs to change as it relates to practising proper hygiene.

"I don't believe that it is because of [the absence of a] bathroom why, right where you are selling, you would lift your skirt up and pee right there," Brown Burke said.

"I have been there (at St William Grant Park) and I have seen a man come inside there with his peanuts, and instead of using the bathroom, he went around the corner," Brown Burke recounted.

"I had to say to him 'the bathroom is right there. You are actually peeing in the bathroom'."

She said: "And I'll tell you what happened. He zipped up his pants, put his peanuts on his head, wiped off his hands on his pants and walked away."