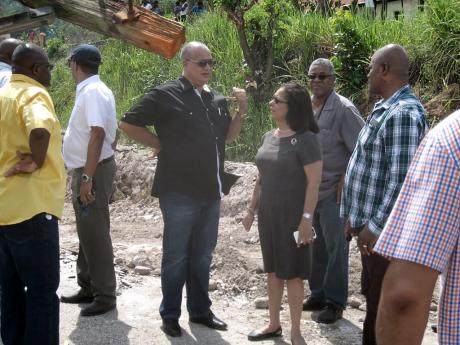 Communications Manager at the National Works Agency (NWA), Stephen Shaw, says the agency is working to have the main road from Trout Hall to Frankfield in Clarendon reopened by this Friday.

He says the NWA continues to clear roads blocked by landslides with the main focus being to restore at least single lane traffic if the weather conditions permit.

“There is a massive failure at Trout Hall, and the area has been excavated and is currently being restored. That diversion currently being used through Park Hall is very narrow and dangerous for all motorists. Further up at the Green River Bridge, boulders are being used to fill the breakaway in the road which is expected to hold together to allow single lane traffic flow,” he said.

However, Shaw says the road clearing efforts are being hampered in some areas due to insufficient equipment to do the work.

Meanwhile, Member of Parliament for North West Clarendon, Richard Azan, says the restoration of basic amenities such as water and power to communities affected by the flooding will be dependent on how soon the NWA is able to restore the major thoroughfares to vehicular traffic.

Azan also expressed concern about kids who have to travel along unsafe roads or through gullies in order to get to school.

Minister of Labour and Social Security, Shahine Robinson, says her team continues the distribution of care and food packages, as well as tarpaulins and mattresses to those in need.

“The needs are not so much domestic but more infrastructural. But the assessments continue, and supplies continue to be made available for areas such as Trout Hall Pass where that entire community remains cut off and persons have to wade in knee-deep water to get in and out of the community.”