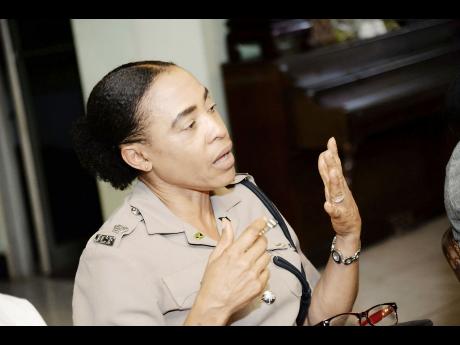 The commander in charge of the Clarendon police, Superintendent Vendolyn Cameron Powell, said an investigation has already been launched into the matter involving bus operator Kevin Clarke and the police which left Clarke with a broken right arm last week.

Clarke's arm was broken during an altercation with officers attached to the May Pen Divisional headquarters last Thursday. The matter sparked a massive demonstration in the bus park yesterday morning leaving hundreds of commuters stranded.

"This is just an unfortunate incident and it's not something we will be pushing under the carpet. We'll be investigating and the chips will fall where they may," said Cameron Powell, as she addressed the visibly disgruntled operators.

She pleaded for understanding from the operators even as she promised that she has taken note of their complaints. She said the investigation is well advanced.

She also noted that she has seen a video of the incident which has been circulating on social media. The four-minute video shows a man in a blue uniform who appeared to be Clarke being manhandled by two officers along a section of the roadway as passengers and onlookers looked on.

According to Clarke, he was ticketed by the police and left the park but was chased by the officers.

"Dem ride down di bus and swing in front of the vehicle and before I could stop the bus, I ended up hitting dem off the bike," he said. Still traumatised, the bus driver said he was hauled from the vehicle which was loaded with passengers and thrown to the ground.

He said he was taken to the police station where he was locked up for close to eight hours, before he was released and eventually got medical attention.

Clarke was charged with several offences and is scheduled to appear in court on July 5.